“Way down deep, I'm very shallow." Ah yes, Dorothy Parker has the best lines. The first year that I held an Oscar party, after moving to the Sunshine Coast, was in 2002. That year, Vanessa claimed the honours of the highest score on the ballot. One of those present asked her, Vanessa, how did you know best foreign documentary?  And she answered, I just did. Which is just about all that any of us can say when we win. Of course, some of us do our homework, some of us just wing it, and what the heck, both approaches have been known to work.

Sarah , has been at our Oscars celebration every year since we started, but she also had her own award to brag about this year, so I decided that she should have a cameo moment in this blog.
You see, Sarah and her partner, Kerith, have developed a revolutionary walking crutch, SideStix. You can use it to climb mountains such as Kilimanjaro (as she did),walk the Camino de Santiago trail (as she also did), or to clamber over every imaginable obstacle on the West Coast trail (again, as she did). All this, with only one leg. Aside from these kinds of athletic accomplishments, this device is majorly important because it protects every joint from fingers on up through shoulders – all of which are at risk of injury for those who use crutches for any significant length of time. Which is totally worth the recognition that she and Kerith received at the New Ventures BC Competition and the $20,000 that came with it.
Now, back to the Oscars. Time to get deep down shallow again. In 2003, Vanessa had the honour of passing the statue to Rosemary. Over the past ten years, Rosemary has been our hands down champion, either winning or tying six times.
Amazingly, this Oscars ceremony has been held without fail –for the past decade, even one year when I wasn’t home. I had forgotten this, but someone recently reminded me I had set the space up for the party, put out enough glasses, cutlery and such, and then left for Ireland the day before. Friends then let themselves in, and they all pulled it off without a hitch. As a result of this interrupted record, our statue base has had to grow - and soon, we will need a new layer.
One of our other traditions, is sharing a great truckload of nosh and drink. As for The Moi, I always enjoy baking bread ahead of time and shaping the loaves into the letters O-S-C-A-R-S. Others pitch in salads, finger foods and desserts. 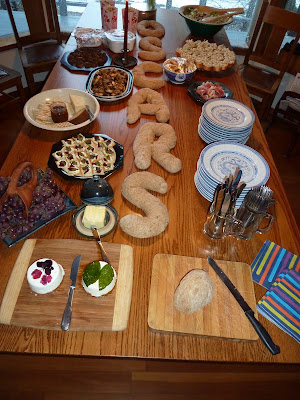 For easy reference, I have posted blogs containing some of the recipes. There is one for the cocktail, Head Over Heels, one for the ice cream, and one for the sherbet. That should keep you out of trouble. Or else, get you into it.
And last but not least, no Oscar evening would be complete without a winner:
Posted by SharonOddieBrown at 3:52 PM