The term tonypandy is a lovely word to have in one’s kitbag. It was coined by a character in Josephine Tey's 1951 novel, The Daughter of Time. It refers to the way that community memories can take root, even when the known facts don’t fit. For example, these days, a fifth of the population in America is convinced that President Obama was born in Kenya, and is also a practising Muslim. This is nothing more than toneypandy. Not that this is a new phenomena.
As I said in my previous blog, when I explored the nature of felt memory in relation to known facts, Memory is like a liquid, it flows to fit the shape of our social and political narratives. Sometimes the more interesting question is not how is it that people can come to believe in things that are evidently untrue, but why do they have such a need to cling to such beliefs.
Recently, new light has been shed on two pivotal events in Irish History: the Rising of 1641 and the massacres by Cromwell at Drogheda, four years later. For those of you who are new to Irish history, as I am, thousands of Protestants in 1641 were murdered by Catholics. Many of these Catholics had legitimate economic, and human rights issues, as a result of being under the thumbs – or more often the boots - of powerful landowners, who were mostly Protestant. These Protestants had won title to land half a century earlier in Queen Elizabeth’s time, land that had previously been held by the upper class Catholic landlords. After the Uprising in 1641, Cromwell rolled in, and, well, poor old Ireland, it was tit-for-tat time once again.
Last year, Trinity College completed the digitalizing of the 1641 Depositions, and made them public. These records contain remarkably detailed stories recorded in the aftermath of the Uprising. There are heart-rending accounts of individual men and women who had lost cows and crops, inventories of cloth or leather, and other such chattels. Many of them had their houses burnt to the ground, or had family members murdered. The University of Aberdeen used cutting edge software to undertake further linguistic analysis of these stories, and lo and behold. what did they find? A certain level of tonypandy.
Apparently, words such as: believeth and thinketh as well as phrases such as hath credibly heard appeared far more frequently than phrases such as saw or witnessed. A report of their findings was recently published in the Irish Times
It is important not to take this finding too far. After all, not all of the 8,000 depositions were based on second hand sources, hearsay, gossip or what have you. For example, one of the records that interested me – because of my JACKSON connections – was that of Richard Jackson of Ffarnham, in the Parish of Urney, Co. Cavan, a buttonmaker ,who lost all his goods and chattels, corn, hay, cows, garden produce, and a horse and a mare. Another Jackson, a tanner’s son, was killed near Lisnagarvey which would be near Lisburn. Interestingly, although this death was referenced in two dispositions [MS 836 & MS 838], it may be significant that both versions were based on hearsay. My bet is that he actually was killed, albeit possibly before the uprising.
Propaganda has always juiced up human emotions for effect, particularly the emotion of fear, and it was true that in 1641, Irish Protestants did have reason to fear. One contemporary Jesuit writer, Father Hugh Bourke, stated quite baldly that the war was begun solely in the interest of the Catholic and Roman religion. He was in a position to know. Not only was faith an issue, but so was land ownership, as well as political power. As Aung San Suu Kyi recently put it, The value systems of those with access to power and of those far removed from such access cannot be the same. The viewpoint of the privileged is unlike that of the underprivileged.
Last fall, I toured the Millmount Fort at Drogheda, the place where Cromwell faced some of his most fierce resistance. As my tour guide directed me through the unlocked gate, he told me, We used to be taught that Cromwell had killed great numbers of women and children here, but recent scholarship teaches us that this interpretation was wrong. But it was what we were taught. 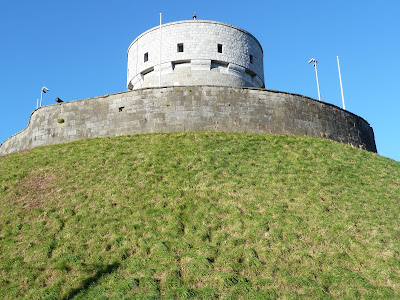 Fergus Whelan in his marvellous Dissent into Treason: Unitarians, King Killers and the Society of United Irishmen has assembled some pretty compelling facts suggesting that most of those butchered at Drogheda were soldiers and English and Irish Protestant royalists. Ironically, given the future religious-ethnic divide, the commander of the garrison at Drogheda, Aston, was an English Catholic royalist.  At the time, it was common military practice to murder other captured enemy soldiers, particularly when they had refused to surrender. After all, a paid, standing army was a luxury in itself, and most commanders could barely afford to house and feed their own soldiers, let alone hundreds of captives.
As for the other allegations, such as the ones that Cromwell was alleged to have murdered nuns and monks and destroyed their religious houses as he moved from Dublin to Drogheda and Wexford,  well these don’t pan out either. Dr. Ni Mhurchadha points out that not only had most of the convents and monasteries already been closed down during by Henry VIII in 1536, but that if Oliver Cromwell were responsible for all the destruction attributed to him on his way to Drogheda, he must have travelled there by three different roads.
The point in these recent reappraisals of common historical memory is not that Catholics didn’t slaughter thousands of Protestants in 1641. They did. Nor that Protestants didn’t slaughter just as many if not more Catholics under Cromwell. They did. The point is that the felt narrative, the memories of what had happened to each community, galloped far ahead of the facts. After all, that was part of the purpose of the stories. To activate the base, as we would say today.
Violence can be an effective tool, bringing about political change quickly, but it always leaves the kind of hurt and debris that become the fuel for even more damage. Nurturing past hurts in the form of false or exaggerated memories is often part of this fuel. As always, where we stand shapes what we see, and it also shapes what stories continue to resonate. The health of Ireland today is in part because the narrative of times past is indeed shifting. Now that there is also less fear, there is also less need for tonypandy. New stories are finally being told, and the people at Trinity, Aberdeen and elsewhere are all part and parcel of this. They deserve our thanks.
Posted by SharonOddieBrown at 4:32 PM