For more than a year, I didn't upload any new posts to my blog site. Instead, I spent most of my available time transcribing and uploading hundreds and hundreds of pages of raw data to: The Silver Bowl. Before arriving in Dublin, where I am right now - overlooking St. Patrick's Cathedral, I also took several months to get somewhat fit. As the BC Lotteries Commission advises us (and as my daughters and husband kindly remind me - with great frequency): Know your limit - Play within it.

I focused on weight training so that I would be able to heft the 20-40-pound  parchment volumes of deeds known – for good reason – as tombstones. As it turns out, hefting tombstones was not needed this time round, although given my 54-pound suitcase, a 20-pound back pack and a 10-pound bag, my new-found strength came in handy as I hauled it all up four flights of stairs to get to my Air BnB. In defense of my habitual pack-horse idiocy, I will point out that I do travel with various gifts and food. After all, there are books that I need to give to people. Plus, how can one live without kick-ass olive oil, balsamic vinegar, maple syrup and two kinds of miso?

Anyway, back to what matters. Now that most of the Registry of Deeds documents are on line, and there is no need to heft tombstones, I will simply carry on on from where I left off after last year’s research trip. I now wish that I had added another week to my stay in Dublin. I always forget how many days it takes before jet lag stops nibbling at me. Now, I have only four days left in this city before I return for a last hurrah near the end of May.

In the posts to follow, there will some breaking news with respect to the many lines of Jacksons who sport sheldrakes in their family crests. This is of more consequence than might be apparent at first blush. In other posts, I will take readers with me as I baby-step forward like a child playing Go-Go-Stop. Several steps forward, and then back to the starting line. This is the nature of this quest. Hopefully you will not have to wait another year to learn more because - yes - I do intend to write about it, and yes, I will then post it all here.

Echoing Seamus Heaney, these blog posts are part of my way of digging with a pen.

The cold smell of potato mould, the squelch and slap
Of soggy peat, the curt cuts of an edge
Through living roots awaken in my head.
But I’ve no spade to follow men like them.
Between my finger and my thumb

The squat pen rests.
I’ll dig with it.
Posted by SharonOddieBrown at 1:16 AM 0 comments


Today I went to church. This would be something decidedly unusual for me to do in Canada, unless someone had died or was getting married (or baptized), but it is quite a regular thing for me when I am in Ireland. It gives me time to pause and reflect. Without favouring one over another, I attend churches that are Presbyterian, Catholic, Methodist or Church of Ireland. What they share in common is greater than what separates them. For me, they offer time and space to consider powers greater than myself, however I might choose to frame that.

Today, I attended Matins at St. Patrick’s Cathedral in Dublin. In part, I chose this church because it is just across the street from where I am staying, but it was also because the service was going to feature boys’ and mens’ choirs singing together. It is rare to hear this in Canada. Plus - bonus – they were going to include a piece by Elgar.

Many times during the service, my friend Colleen and her nephew Sean – also a friend – popped into my head. Later today in Abbotsford, they will be putting Rhonda, Colleen’s sister and Sean’s mother, to rest. I barely knew Rhonda myself. Mostly as a painter, an amazing painter, and as Colleen’s older sister. The other part that I know about her concerned her life-long struggle with addiction, a struggle which had led to the abandonment of her children. I doubt that either – addiction or abandoning children - would have been her first choice, but addiction can be like that.

Today, when I recited the Absolution, for my (as they say) sins of omission and commission, I also thought about Rhonda. Maybe she would have laughed with utter abandon had she heard me. After I had finished reading the whole thing out loud, I noticed the instructions at the bottom telling us that the priest was supposed to be the only one to read it. I had wondered why others in the congregation were silent. Ah, yes: And we have done those things which we ought not to have done. 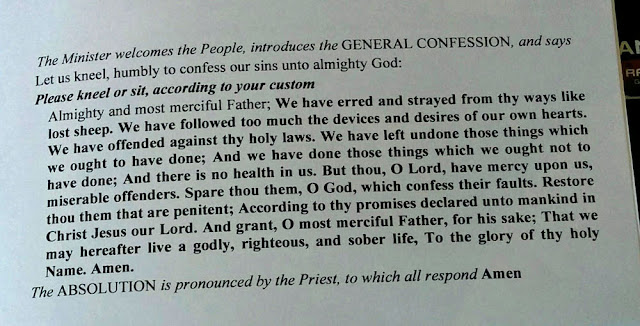 It is an odd thing, to sit in the kind of church where the sun glints off the rows of knights’ helmets arrayed above the choir beneath dozens of old flags and cloth standards. I wonder. When it comes to histories of churches, perhaps we should cut them the same slack that we ask ourselves to do for ourselves: And we have done those things which we ought not to have done. 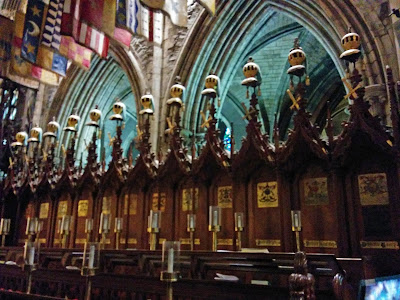 The glory of being in such a place on such a Sunday is that it is possible to be part of an assembly of people who - after all - are choosing to try to do their best. The architecture and the music complement one another in support of this devout hope. The chords of Amen sung by men and boys together make it impossible – even for me - to avoid the experience of transcendence.

As I listened to the choirs sing their version of Elgar’s Anthem, it also occurred to me that they could have been singing it for Rhonda as well as for any of those of us present.

The Collect could also have been chosen for Rhonda: They went astray in the wilderness out of the way; and found no city to dwell in. Hungry and thirsty: their soul fainted in them. So they cried unto the Lord in their trouble: and he delivered them from their distress. Psalm 107 vv5-6.

In Rhonda’s last days, there were some genuine mercies. Times of grace. Some wounds were healed. Some solace was found. What more can one hope for at the end of such a life? Blessings. To Rhonda’s sisters and to her children and grandchildren. And also to Rhonda. Blessings.

PS to Sean. After the service, I walked up the hill to the Queen of Tarts to buy a piece of apple pie. It is excellent pie, but not as good as yours. Tante Gertraut would agree.

PS to Colleen. Because of the time difference, it will be evening here when your service begins. I will raise a glass of Bertha’s Revenge as my way of sending a blessing – Devout Pagan that I am.

Posted by SharonOddieBrown at 8:36 AM 2 comments