Angela, Stacia, Vanessa & The Moi, cooked dinner for 25 at Roberts Creek Cohousing yesterday. What totally delighted us, over and above how the food turned out, was that there was enough left over to feed the children of a friend of ours who is currently in hospice with a terminal brain tumour. A small blessing in a hard time.

To accompany the vegetable stew, we served quiche made with eggs from our own chickens (and also Stacia’s celebrated butter-pastry), salad - which included garlic from the Cohousing garden, home-made bread (with freshly ground flour) & Vanessa’s strawberry ice-cream. Angela, being Angela, decorated the tables with flowers and candles to add that extra bit of pizzazz. One word sums it up: Fun. Ok, maybe two words are needed: Total Fun. Absolutely! 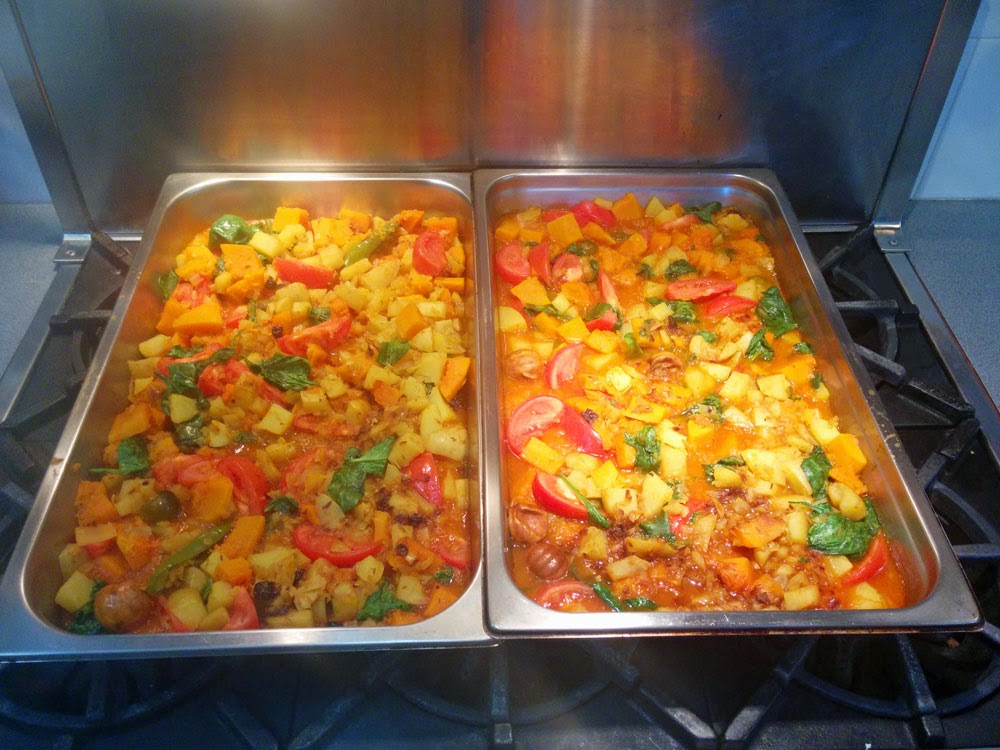 Some of the ingredients used by Yotan Ottolenghi are impossible to come by on the Sunshine Coast. Instead of dried limes, I used a mix of dried lemons (thank you Kinga) & calamamsi. Instead of barberries, I added dried cherries. It worked perfectly.

NOTE: We cooked the vegets in the oven for longer than suggested – probably 30-45 minutes. It thickened the sauces nicely, didn’t overcook the veg, and caramelized the top. A plus.


Posted by SharonOddieBrown at 11:05 AM 0 comments


A friend from Gilford Castle in Co. Down sent me a card this Xmas with the image of a water colour that she had painted of a robin. It looked just as expectant and trusting as the robins that I have seen at the feeders which she always sets up outside her kitchen window.


Christine is one of those who is most faithful when it comes to sending out the ritual Christmas card, usually hand-drawn. Unfortunately, I never was any good at this. The last year that I got around to mailing any cards, even though I had addressed the envelopes and enclosed the cards at the appropriate time, I didn’t get around to mailing them until Easter. That did make them memorable.

Fortunately, I am much better when it comes to the tradition of parties. Twelfth Night is one that Andreas and I have hosted over the years. There are a handful of friends who have been to every one. Since 2014, was to be our 30th celebration of Twelfth Night, we decided that it would be a good time to make it our last. We wanted to go out with a bang, not a whimper.

Some background. We had started this ritual in 1982, when my mother was slowly dying of cancer, and our youngest daughter had been given a medical diagnosis that was beyond bleak. As part of seeking release from the darkness of that year, I had decided to write down everything that I needed to let go of, and in the company of others, I threw that piece of paper into a Jesus-big fire fueled with dried out Xmas trees, wrapping paper, and candle stubs. Our friends all did the same. In the three decades of hosting this ritual event, we only had to miss hosting it twice – once because we were in Winnipeg, and once because I got sick.

In later years, we expanded the ritual notion of what our Twelfth Night fire was for, and included the expression of gratitude. We also started  singing silly songs, such as The Viking Song, sung while drinking Aquavit, and eating herring on pumpernickel. This was then followed with a chaser of beer. In one version of the song, apocryphal I am sure, this whole approach had something to do with what fish needed in order to be able to swim upstream and regenerate. Metaphorical fish, I am sure.

This year, as always, Andreas also performed his political rant. His evisceration of Stephen Harper had us all joining him in the chorus:

Dog my cat
Stomp my hat
How in heck does he get away with that.

A week after the party, I received a video clip of two year old Emmet who had been there with his parents and grandmother. He was now performing his version of Andreas’ rant.  I can’t help but smile about this. The last of our Twelfth Nights may be done and gone, but it may very well be that toddler rap has already picked up the torch.

This year, we had to cancel the ceremony of the fire because of rain, but to fill the gap, Angela and I stood on a couple of chairs and sang: Does your heart hang low. Partly, this was in celebration of the fact that Kinga was well enough to be with us, but it was also a way to include our thoughts for Kathleen, who was in hospice, and Nairn, who was once again back in hospital. At the first Twelfth Night event that we celebrated up on the Sunshine Coast, Nairn was five years old. When it was his turn to speak at the fire, he said that he wished for everyone to be healthy, and he hoped that we would all catch a big fish. In spite of the fact that he had already been helicoptered into Vancouver once that year in critical condition, and would be repeatedly in the future, it is worth noting that he didn’t ask for good health only for himself, but for all of us. His grandmother was a member of the Gitxsan Wet'suwet'en, so after Nairn had spoken his piece, his father Chris threw some ritually appropriate paper-money into the fire.

Everything from our last Twelfth Night has now been packed up and put away. So has the crèche that I always put out at Christmas. Like the ritual party, it too has been three decades since I first made the Biblical figures, and Andreas built the crèche to enclose them. My version departed somewhat from the usual picture of the event. Instead of three wise men, I included two men, and one wise woman who looked as much like Margaret Laurence – godmother to Sabrina- as I was capable of doing.

Margaret’s death took place in a later January, although she was still alive when I was making the nativity scene. She had laughed on the phone when I told her that I had included her. A few years after she died, the whole crèche fell over. The angel lost its head, and Margaret lost her hands. The thing about Margaret is that if I had been able to tell her about this turn of events, she would have replied, That’s all right kiddo.

As I write this, my sort of a belatedly, year-end, writerly-clean-up, my Margaret-without-hands has once again been wrapped up in newsprint from the last December edition of the Coast Reporter, along with Mary, Joseph, Jesus, and the other wise-men. Also, the angel with its glue mark visible on its neck, has also been tucked back in with the shepherd, camel, and the boy holding a staff who kept watch on the sheep.

Rituals. I am a sucker for them.

Posted by SharonOddieBrown at 4:33 PM 1 comments