It seems to me that there are five elements to a successful party: the mix of people, the flow of events, the food, the drink, and the setting. As my dear friend Kinga said of her recent 64th birthday party, How can you improve on perfection?
1. THE MIX OF PEOPLE:
As Kinga's 64th birthday was approaching, her daughter, Katherine, hit on the idea that it would be wonderful to have her four mothers all together. As one of the four mothers, I can assure you that we are not some hippy-dippy mothering collective – although that would work with the four of us. We are simply the four mothers that Katherine has known since birth, and who have in time become not only significant friends of her mother, but of herself as well. One of us met Kinga at a prenatal class over thirty years ago, and the other two have known her since our late teens – in the mid 1960s. My own great-great-grandmother would have called the four of us: The Connexion.
2. THE FLOW OF EVENTS:
We decided that often when birthday cake and champagne are served at the end of a party, as is usual, then their full glory is not fully attended to. That's such a loss. With this in mind, we started with champagne and cake. The fireplace had been stacked high, with logs that had been bucked up and stored by son-in-law Peter, and friend Andreas, and possibly other off-stage folk. Once lit, it cast a glow on us, the flames crackled and danced, and we in our ongoing chat did likewise.
Then we moved on to the entertainment. Katherine and Peter had made a 25 minute exercise DVD for Kinga, perfectly attuned to the needs of her bod at this stage of life. With daughterly glances clearly directed at the camera, Katherine repeatedly instructed Kinga: Now, Mum, remember to breathe.  She managed to deliver this line totally deadpan, all the while hoisting a bottle of gin which was a stand-in substitute for a weight. I believe it was a half-full bottle of Tanqueray – the gin that was initially distilled in 1830 by Charles Tanqueray in the Bloomsbury district of London. Obviously, the weight of such a bottle varies - maybe two or three pounds, depending on how much has been left undrunk – but its virtue is that it introduces an added level of complexity, since it sloshes around. Very important to know.
3. THE FOOD:
After such a workout, or at least after watching such a workout, it was definitely time to eat - again. As you know, we did start with chocolate cake, but I will leave that for the last since we also had it again.
Appies: home-made whole wheat, pumpkin-seed bread – made with home-ground flour, a Little Qualicum Camembert, and veggies with Green Goddess Sour Cream dip.
Mains: These were all inspired by recipes developed by the award-winning couple who run Vij’s Restaurant  in Vancouver. If you live on the Sunshine Coast, you can buy their cookbooks at Talewinds, or if you are in Vancouver, then I recommend Barbara Jo’s. Our mains included Vij’s chicken – the recipe is on Barbara Jo’s blog - with fresh asparagus and corn using the same spice combo that is used in Vij’s Summer Vegetables recipe. Both recipes come from Vij's first cookbook:  Vij’s Elegant & Inspired Indian Cuisine. The rice pilaf with cashews, cranberries and saffron – which is stellar as a leftover for breakfast – comes from their more recent cookbook, Vij’s At Home: Relax, Honey. Then because, Kinga had ordered noodles to be part of the meal, egg noodles there were, tossed in finely chopped Italian parsley and a scant of butter. The chicken sauce turned out to be a perfect marriage with the noodles.
Dessert: Since a picture is worth a thousand words, this picture takes the cake – so to speak. The recipe for the cake itself is in an earlier blog of mine. The hearts surrounding the cake are actually medicine, to be taken one per month for optimal good health. They are made from Denman Island Chocolate, and as the site for their chocolate says,  Welcome to Chocolate Nirvana. 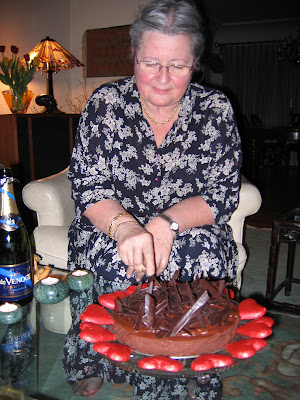 4. THE DRINK: Kinga’s mother has a wonderful Hungarian joke, thankfully translated into English. If you ask her what she would like to drink, she often replies, anything that starts with a “T”.... The first time I heard this, my mind went racing down various dead ends, trying to recall what drink might start with the letter “T” - except for tea, which was not the likely answer - but then with perfect timing, she gave me the clue, .... the wine, the beer, the gin .... On this august occasion, the five of us stuck to the wine and had two equally priced bottles of Chateuneuf de Pape which had been specially chosen so they could go head to head with each other. At the end of the evening, we declared that the La Bernadine, Chateuneuf de Pape, 2007 under the imprint of M. Chapoutier was the hands-down winner. According to Parker, Displaying an almost encyclopaedic array of flavours including coffee, cinnamon, liquorice and morello cherry, this Châteauneuf du Pape wine is rich with classic Provençal herbs, black fruits and hints of mint all vying for attention alongside the ripe, silky tannins.  Yeah, right, as if we got all that. There was also a forgettable white wine, which will go unnamed to protect the innocent. On the other hand, the Cordon Bleu Brute Select, de Vanoge proved to be the perfect match for the champagne course. It was distinctive, with additional notes discovered in each succeeding sip, much in the same way that you might notice an instrument playing in the refrain of an orchestral piece that you had missed the first time round. Or at least, that’s what this wine felt like to our assembled amateur palates. 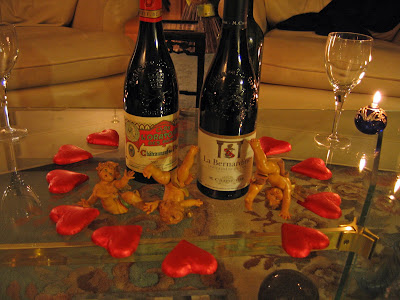 5. THE SETTING: The home of The Kinga. It doesn’t get any better. We all slept over – well, except for Katherine, whose handsome and charming husband emerged from the basement where he had spent the evening building a Lego Castle, and the two of them drove home to Burnaby in the wee hours of the morning. But that’s another story. The Castle is way beyond cool.
Posted by SharonOddieBrown at 10:53 AM