All you ever need to know, Struan said when we got talking about permaculture and organic gardening, is between the covers of two books. One published in 1802 and one in 1885. They didn’t have chemical fertilizers or pesticides back then. Also – for most people - if they couldn’t grow their own food, they went hungry.

My brother Struan and his wife Sara are experts about this. They grow thousands of pounds of organic produce every year on their farm in Gibsons. Three decades of trial and error will get you there, at least if you have a strong enough back, enough energy, and also the ongoing curiosity and wisdom to learn. Their children and grandchildren enjoy their home-grown food, as do a bunch of the rest of us. Much of the rest of the harvest is sold at their stall at Chaster Creek Farm. The two of them also pickle, can, dehydrate, freeze, and do whatever else it takes to preserve for year round use. Not only that, but they also raise sheep, chickens, turkeys, ducks, you name it – all in the time available after Struan works full time at his paid job, and Sara takes care of this and that at their Chaster Creek Farm and Stables.
These days, growing our own food is regarded as a hobby that some take up and most don’t. This luxury may not last. As things start to shift in the global economy with respect to available land, as well as the costs of food production, many of us will shift our behaviour too. The Victory Gardens that sprang up in World War II happened almost overnight. Nothing focuses the mind as much as execution – or in this case, a food shortage.
Struan was kind enough to lend me both of the books he had referred to. The first, published in 1802, Rural Recreations or the Gardener’s Instructor was a present that he had been given by his long-time friend, Mattie.  Although you can find this book on line at Google Books, nothing beats holding it, smelling it, flipping through the pages, or gazing at the watermarked endpapers. I particularly love the phrasing, the style of the language, and how it takes me back in time:
In determining the choice of a place proper for a garden, the most essential points to be considered, are situation, water, soil, exposure, and prospect. The most desirable situation, is a gentle declivity, equally sheltered from the violence of the wind, and the extreme heat of the summer sun: the value of such a situation will be much enhanced, if it abound with springs, which are necessary in forming fountains, canals, cascades, &c.
A proper soil is the next consideration of importance. It ought to be free from stones, and not difficult to labour; neither should it be too dry, light, and sandy, but somewhat moist: strong and clayey land is, however, least of all adapted for this purpose.
The prospect of a fine country; though not so essential as water, yet as it tends to produce a happy effect, ought not to be overlooked, when it is attainable.
When Struan and his wife Sara first moved to the Sunshine Coast three decades ago, they lived and grew their crops on North Road. The soil there was so rock hard, that even the most robust rototiller couldn’t make a dent. I’ll never forget the sight of seeing Struan approach the problem with the only practical solution - a jackhammer. There are advantages to living in the 20th & 21st centuries. Within a few years, his unorthodox approach paid off, and they were soon surrounded by abundance, some crops growing taller than my head.
The property that they moved to three years ago has a better climate, but had not been used for veggie growing, so they had to start from scratch again. They tilled the soil, built a 25 foot by 95 foot greenhouse, and started what they call the upper & lower gardens – two beds of about 120 feet long and 60 feet wide, one 60 feet by 60, and a fourth one 50 feet by 50. This amount of land under cultivation is impressive in itself, but it is his carrots that totally knock my socks off. 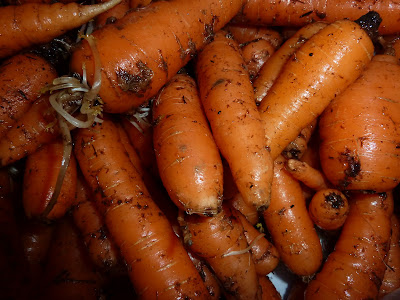 Last fall, he gave me a bin filled with carrots, covered in peat moss. If you leave them to overwinter in the soil, he explained, they get woody and you lose too many to frost. The ones in the picture above are what was left in my bin by mid-February. Four and a half pounds of them, and not a mark of carrot maggot amongst any of them. I had to know how he had pulled off this feat.
First, you got to till down extra deep. If you don’t, then the top of the root clears the soil and is an open invitation to carrot fly. Also, you have to weed when it is raining, or else turn on a sprinkler hose right afterward. Then if you harvest a carrot or pull a weed, you have to tamp down the soil so the flies can’t get in. After hearing this, I now know why my carrots have never been a patch on his. Last year, some of his were more than a foot long, and as sweet as candy when roasted with chicken.
He isn’t content though to rest on his laurels. Recently, he was at a three day conference on agriculture held out in the Fraser Valley. Some people he met there told him about the cheapest place for buying more irrigation hose and fittings. Rubbing shoulders with other farmers adds to what can be learned from books. But the ideas from books also still hold him in thrall. He was telling me that he wants to try using the old methods of heating greenhouses, digging a deep pit, and filling it with animal manure. The heat generated while it rots is enough to grow pineapples in Ireland. 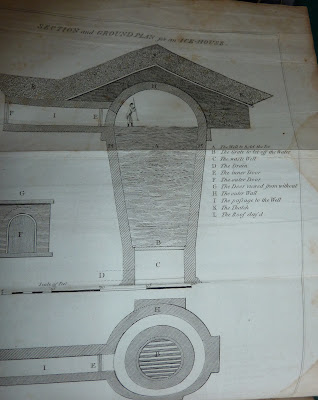 We may come from a long line of Irish farmers – but Struan is the only one of us who keeps this gift alive. He also makes and smokes his own fish and sausages, not unlike how our Irish ancestors did The old family farmhouse at Killynure, Co. Armagh was constructed with a smoke chamber leading off the chimney on the third floor, so that hams could be cold-smoked by the residue of smoldering turf. I like the continuity here – especially since Struan wouldn’t let me go home the other night without a link of his home-smoked Ukranian sausage, and a package of his pepperoni. He also showed up the next day with a loaf of his Holy Crap bread, made with a cereal produced right here on the Sunshine Coast. Two slices of that bread, and you are good to go till lunchtime.
Home grown, home cooked, home everythinged - it all starts to seem like that title from a movie: Back to the Future. Heck, as long as it tastes this good, I am all over it. Time for me to stop writing this though and go and grind a cup or two of flour for tonight's pasta. Yes. Life is good.
PS. There are a range of models of organic farming emerging. In Vancouver, the back yard of my friend Kinga is farmed by a couple of women from the Urban Farm Network. Here on the Coast, Dawn Myers at Bounty Farms grows her produce on other people’s land using nine different sites, and the SPIN farming model. She sells her harvests at local Farmer’s Markets. I often walk up the hill to shop at the Roberts Creek Farmer's Market, when I don’t drive to Gibsons to buy from Struan and Sara’s farm. This spring, Struan & Sara are adding a new feature to their marketing - they will post on their web site a list of what has been harvested, so you can know ahead of time what you are likely to find there – at least, if they haven’t sold out.
2nd PS. The 1895 book: The Vegetable Garden by M.M. Vilmorin-Andrieux  is also available on line. It can be downloaded on a Kindle, which is handy in case your dog eats your copy. Actually, it was a copy of that very same book that one of Struan’s puppies totally devoured a few years ago, leaving not much more than tell-tale confetti on the carpet. I guess the dog had good taste.
Posted by SharonOddieBrown at 5:01 PM