TJ and the Story of his Statue

Sir Thomas Jackson never took himself too seriously, not when he was first knighted, nor even later when he became a Baronet. Both of these honours occurred decades after he had arrived in Hong Kong in 1864, at age 23. He had started life as the son of an Irish tenant-farmer, and the family having no money for further education, he was apprenticed as a clerk with the Belfast branch of the Bank of Ireland for a couple of years before he gambled on a career in the Far East.
In 1865, after a brief stint with the Agra Bank, he had started working at HSBC in Hong Kong. This bank had opened for business a year earlier, and by the time Thomas started, there were less than a dozen staff on board. He rose through the ranks, as did the bank  – both of them to international prominence. I can imagine Sir Thomas - or TJ as he was known - in 1906 at the unveiling of his statue, being both bemused and pleased.
Maryon Pearson, the wife of Lester B. Pearson, a Canadian Prime minister (1963-1968) who won the Nobel Peace Prize, once said, Behind every successful man, there stands a surprised woman. Sir Thomas’ mother, had she lived to see this statue, would not have been at all surprised. In her eyes, this was all part and parcel of God’s will, with a little nudge from her ever-humble – or at least, trying to be ever-humble – self. This seemingly ever-patient, Irish-Scots-Presbyterian God was regularly bombarded by Eliza’s prayers on behalf of her son, and also on behalf of the bank that they both called The Old Cow.
In spite of Eliza’s Scots-Irish attempts at humility, it still would have pleased this redoubtable old soul that her son’s statue was created by the famous sculptor, Mario Raggi. After all, this was the same sculptor who had also created a statue of Queen Victoria, as well as one of Gladstone – both of whom ranked high in Eliza’s esteem. True, he had also created a statue of Disraeli, which might have been counted against him, but perhaps that couldn’t be helped. This is an aside, but it was clear that Eliza disliked Disraeli so much that she never actually referred to him by name. She called him Beaconsfield, a name that came from his title Duke of Beaconsfield. But enough of that. Although Raggi died a mere year after this statue was erected, he was still in top form. The quality of the statue speaks for itself. 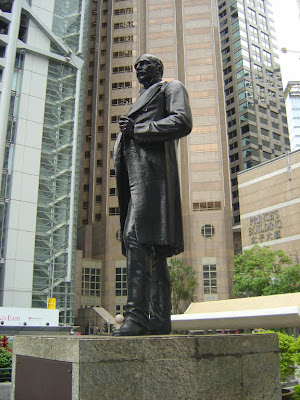 In honour of
SIR THOMAS JACKSON, BART.
(1841-1915)
and in grateful recognition of
his eminent services to
the Hongkong and Shanghai
Banking Corporation
whose destiny he guided as
Chief Manager from
1870 to 1902
So, there was our farmer’s son in 1906, Sir Thomas, standing high on his plinth, in Statue Square, in the company of Queen Victoria & the Duke of Connaught, as well as King Edward VII and the Prince of Wales. Not too shabby.
Significantly, none of these other statues ever elicited much interaction from passers-by, other than the odd glance, but Sir Thomas’ always did. The toe of one of his boots was rubbed often enough for good luck that it continued to shine, as the rest of the bronze darkened over time. When he had lived, he had been known as Lucky Jackson, so perhaps the hope was that some of this would rub off. Years later, when he was told that elderly Chinese women had a ritual of surrounding his statue with joss sticks in times of trouble, he laughed so hard, he could barely splutter out, “And me a staunch Ulster Protestant!” . Years after his death, this ritual continued.
The toe rubbing has since been stopped, made impossible by an installation that precludes easy access. Even so, I suspect that if TJ could climb down off his plinth, he would have a wee chat with the Filipino nannies who gather at Statue Square on their day off, and I also suspect that he would wave away the business-types who might believe that they would have something more important to say. TJ was known as that kind of guy.
It is actually a fluke of history that the statue even stands there at all these days. During the Japanese occupation of Hong Kong, all the statues were removed and trashed. The statue of Sir Thomas was amongst those that were thought to be lost forever. Then in 1945, an American sailor found it, reasonably intact, in the Kawasaki Dockyard. This discovery came to the attention of General McArthur who ordered it shipped back and reinstalled where it stands today.
There was, however, a slight change made when the statue was reinstalled. Now, instead of facing The Old Cow - aka HSBC, these days Sir Thomas keeps his eye on the Legislative Council. In light of the contributions of some of his later life’s work, this may be appropriate.
It is a curious fact that even though the other statues from Statue Square were also found in the aftermath and rubble of WWII, none of them had enough cachet to be reinstalled there - not even Queen Victoria. Her statue may have been commissioned as a Jubilee Memorial, ensconced in a cupola, and copied and installed in numerous other sites around the world, but when it came to her ongoing prominence in the heart of Hong Kong, she got punted off to Victoria Park, in Causeway Bay. Another curious fact is that there was also a further attack on her glory. In the 1990s, a performance artist trying to make a point – goodness knows what it was – climbed up onto her statue with a hammer in hand, and two buckets of red paint. He then poured the paint over Queen V’s head, and used the hammer to give her a rather nasty nose job. An engineering company has since realigned her nose, removed the paint, and now old Queen Vickie has been reinstalled in such a manner so as to preclude future assaults.
Not only have all the other statues moved on to not-so-greener pastures, but so too have most of the grand old buildings that once surrounded the square – the old Prince’s building, the Queen’s building (replaced by the Mandarin Hotel), the King’s Building, St. George’s building, and the Alexandra building – none of them have survived the assaults of the bulldozers of progress and the introduction of contemporary architecture, even though they had all originally been built to stand the test of time. Their designs had reflected some of the best of Victorian architecture, and the loss of them is a loss to all of us. What has survived along with TJ’s statue is the fact that there is still this bank, The Old Cow, known more commonly as HSBC. This, more than anything else, would have pleased TJ to his core.
I have posted a number of archival photos of the statue and its ceremonial unveiling on my web site, as well as the March 3, 1906 account that was published in the Hong Kong Telegraph.
Enjoy.
Posted by SharonOddieBrown at 12:03 PM