What I take with me

My eldest daughter mocks me – lovingly – about the amount of stuff that I tend to haul with me when I venture forth on my annual (or semi-annual) trips to Ireland. She does have a point– especially given my three score years and ten. Mum, you didn’t bring a cedar plank to cook salmon on, did you? Well, yes, I did, and I could explain, but I promise to refrain.

In some ways, the most important bits that I bring with me on my trips are invisible. They remind me of the ritual in Margaret Wise Brown’s famous children’s book Goodnight Moon. For example, I always bring with me my last sight of the mountains from the ferry as I head towards Horseshoe Bay on my way to the Vancouver Airport. 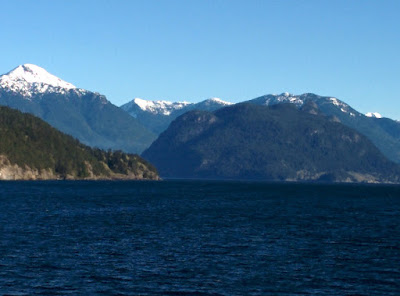 On the morning that I left, I also photographed a framed poem that Andreas and I have in our bedroom. It was written by John Newlove. We constantly need his reminder. You can see me in the reflection on the glass, which is fitting. 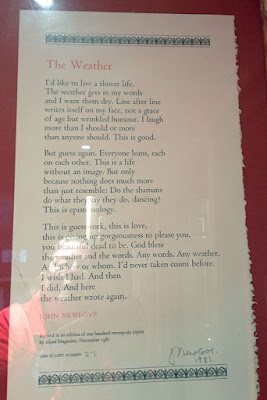 John was wise, but he was also a wild and crazy man. I will never forget driving him home from a party at our place in Regina in 1980, when he was drunk enough that it seemed to him to be a very good idea to try to kick out my windscreen while I was driving, and the temperature outside the car was 30 below. I can’t recall if he didn’t succeed because he was still recovering from a broken hip sustained while falling off a bar stool, or whether that broken hip came later.

Regardless, John was also capable of being the soul of utter kindness. He and Susan hosted us when our new digs were not yet available in the year that we moved to Regina – not an easy feat since the two of them lived in a modestly sized apartment, and we had a one-year-old in tow. Most mornings, he and I sat together with my daughter at our feet, while our spousals were out in the world, as he watched his habitual morning game shows on TV. He got all the answers right, and would shout them out before the contestants on the screen had a chance to hit their buzzers.

This poem of John’s – one of his many brilliant poems - speaks to me on a regular basis, so I had to bring it with me, of course, along with a bit of candied ginger, orange bitters, and pink peppercorns for making cocktails. The essentials. John would understand.

THE WEATHER
I'd like to live a slower life.
The weather gets in my words
and I want them dry. Line after line
writes itself on my face, not a grace
of age but wrinkled humour. I laugh
more than I should or more
than anyone should. This is good.

But guess again. Everyone leans, each
on each other. This is a life
without an image. But only
because nothing does much more
than just resemble. Do the shamans
do what they say they do, dancing?
This is epistemology.

This is guesswork, this is love,
this is giving up gorgeousness to please you,
you beautiful dead to be. God bless
the weather and the words. Any words. Any weather.
And where or whom. I'd never taken count before.
I wish I had. And then
I did. And here
the weather wrote again.

The last little bit of my Goodby Moon rituals, when I leave by air, is always the Black Canoe. I like to sit with it for a bit, after I have checked my bags at YVR. If you do this too, if you stop to sit by Bill Reid's sculpture, and if  as you do, you ever wonder about the sheen that you can see on the Old Mouse Woman’s nose, it is because that is the most favoured place for travelers to touch before they depart. It brings them luck. 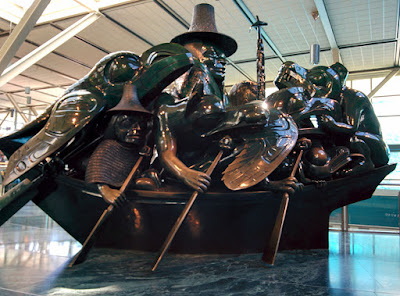 Thank you Old Mouse Woman. Thank you John. This morning as I natter on, a week after I left home, I am finally free to honour the slower life. At least for a bit.

Posted by SharonOddieBrown at 11:05 AM