One year, I really will take the time to write in some detail about my annual week at the Vancouver Writers Fest, but not this year. I simply can’t spare the time. Even so, I feel compelled to steal a few moments away from my current writing project to share my latest discovery: Girl Runner, by Carrie Snyder. I had read about her writing, but until now had not actually read any of her books. This kind of connection, this kind of find, is always my favourite part of the festival.

Just after her workshop, Andreas and I were chatting with Angie Abdou, whose book The Bone Cage, I had bought a couple of months earlier at the Sunshine Coast Festival of the Written Arts, and had recently read with great pleasure. Both she and Carrie are a generation younger than me, and unlike myself, both of them are athletes. Those who know me well, will agree that if a quick twitch muscle ever showed up in my body, it would probably die of loneliness. Fortunately, you don’t have to be either a competitive swimmer or a long distance runner to enjoy either book. 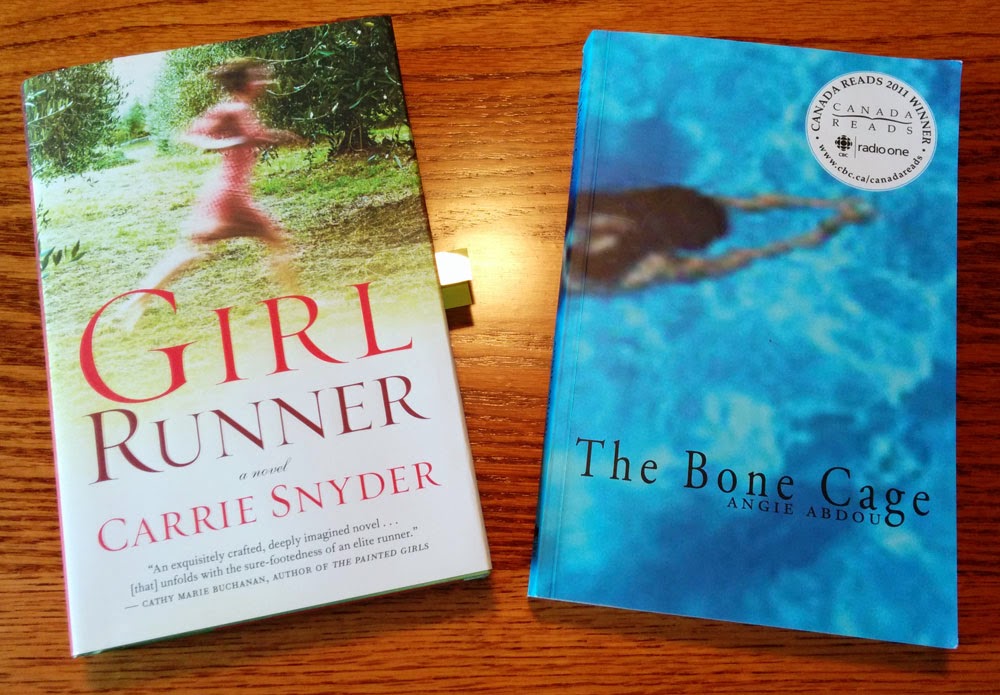 Angie told me that when she had read Girl Runner that she could not help but think of Margaret Laurence’s Stone Angel. I had that same sense, but here is the kicker. When I went to compare the two novels, being curious about what might be the same and what might be different, our copy was gone. Damn! Why do we ever lend books anyway? Why do we never keep a record of who we have loaned them to?

I remember Margaret’s voice on the phone on January 3rd, 1987, so strong and sure, two days before she died. She had wanted to be sure to talk with both of us and with her god-daughter, our eldest, while she still could. We all knew that she was dying of lung cancer, although that was not what took her out. As in most things, she was ahead of her time. The likelihood of winning the case for dying with dignity would be decades in the future. The advice of the Hemlock Society was all that she had to help guide her in her final steps.

Yesterday, I spent some time with a friend who has a terminal brain tumor. Time for reflection. As readers, we always come to novels with our reading of it seasoned with what is in our hearts in the moment. This is as it should be. Understandably, one of the themes which jumped out at me in my reading of Girl Runner was that you can never know what gifts you leave behind you when you go. Aganetha Smart, the central character, had to live to be 104 years old before she could figure that one out. Don’t skip to the ending before you have read your way there. Even though it is a page turner, you may be tempted. I know that I am glad that I didn’t succumb.

Carrie Snyder’s use of language, and the insights that are conveyed ever so lightly, ever so quietly, are well worth the candle all on their own. It would be a great book to read aloud, as an elongated bedtime story. I can’t do that in a blog, but here are a few nuggets. After Aganetha has just placed fourth, out of the medals and the record books and the newspapers, in a race that was hers to win, she finds herself running on a track, all by herself, trying to make sense of it all:

I run strong. I run fine. I can feel my sadness running out behind me, like it’s being spilled on the ground, and I figure that will be that. I won’t be sad, anymore, not over this. I have a sense of impermeability, of elasticity, of bouncing off of something hard, and believing in the first instance that I had been hurt, then understanding the pain is superficial. It is already gone.

This is called recovery. I recognize the sensation from running. Under every layer of pain another layer of recovery lies in wait, the sweet, forever surprising truth of endurance.

Later, in her old age, when she is living in isolation on the family farm with her arthritic sister Cora, with both of them suffering the indignities of age that Margaret Laurence’s Hagar also railed against in Stone Angel, she finds herself still struggling to make sense of life:

She [Cora] is like father was, at the end, empty of all but the most persistent fragments of original self. Like I may be too, losing myself without even knowing it. I wonder: what is the meaning of what’s left behind? I don’t think, not really, that what’s left behind is the true self revealed. I am not that cruel. It seems instead an accidental picture of a life, and true to the way life is lived – not as we may wish it to be lived, but as it insists on being lived.

As I was thinking about all this, in the context of my own current life, I recalled the time when a reader phoned me the day after he had finished reading Some Become Flowers. It was a most unexpected call. We had both been aldermen, serving together on Mission City Council, and had often locked horns with opposing views on policy. He was right wing, ex-military, and stood for so much that I opposed. He was also the last person who I expected to even read my book. My wife made me, he said. I stayed up till 4:00. Then he told me: Several years ago, we lost a child. I didn’t cry at the time. I thought that was how a man should behave. As I listened to him, I was totally puzzled how this connected to my book, a book about a dying mother, not a dying child. He continued. Your book made me cry for my dead child. Thank you.

I sobbed at the end of Girl Runner, but this is part of what art is for, and this is also part of what this novel totally delivers. If Margaret Laurence were still here today, she would be eighty-eight years old, and I can imagine her saying to Carrie Snyder, Kid, this is great.
Posted by SharonOddieBrown at 1:05 PM