My interest in the history of 19th Century Catholic Chapels comes from a family story that is linked to one of Mary Daly’s memories. Her recollections were recorded in 1945, and then transcribed by Michael J. Murphy. Hers is one of the many slices of oral history kept in the Department of Irish Folklore at the University College in Dublin. She lived her entire life in the Crossmaglen area, the small market town a few kilometers west of where the Jacksons – the family who are the focal point of my research - lived throughout all of the 19th century.

This transcription does its best to show what her oral history might have sounded like, at least as well as any written medium can.

There be to be a chapel in Mobane one time. I did hear there was one in Shelagh - on Shelagh Rock..... But there was one in Mobane an' I'll tell you how I know. The Jacksons that time was big people out there an' there was this oul woman was nursin' Jackson - it was him was the one was very charitable. He went out to China.
It was in he's house I seen the first Chinese woman ever I seen. She was in Cross' with him an' she'd be only that height (maybe four feet) an' the lovliest wee feet on her an' two pigtails down her back - an' very sallow.
But this oul woman that used to nurse Jackson before he went to China, or was fit to go - she went dark (blind) an' he used to lift the beads for her an' I mind them sayin' that every Sunday he would bring her down the Monug Road - that's a back way to Jackson's - to Mobane. He'd take her down this road, they sayed, till she be to hear the bell ringin' in Mobane Chapel an' she'd say her beads there.
Jackson was out in Shanghai - isn't that in China - this time an' he was great for charity. But wherever this boat was goin' he stayed back to give out this charity to these poor Chinese at the corner an' they were callin' to him from the boat to come on, but it seems he took no heed of them. Now, he was a great man for charity. But the boat was lost anyhow with all hands. Jackson said it was this oul woman's prayers that saved him. Creggan Local History Society, 1990. Sir Thomas Jackson by Mary Cumiskey.]

The Jackson who had supposedly been nursed by this oul woman, was Thomas Jackson (1841-1915). He went to China, age 23, in 1864. This was 81 years before this recording was made. No wonder then that this speaker prefaced her recollection with: an' I mind them sayin' that.... By introducing the story this way, she is making it clear to us that this is merely what she had heard, not what she had witnessed. Given the way that so many memories get altered over time, at least a bit, I do wonder whether it is possible that she has merged the memories of two chapels into one. Moybane and Monag chapels were both in the Parish of Creggan, but were active in two almost overlapping times.

The Moybane Chapel was the oldest of the two, but it had become derelict by the late 1820s, more than a decade before Thomas Jackson was born. What little remains of it can be seen today in its current life as a handball alley on Alley Lane. It was located in the townland of Moybane, just south of Urker. The two townlands are only separated by the small townland of Sheiland. I have a map on my website of the townlands of Creggan, but I have shaded in the townlands referred to in this post to make them easier to find:

Even though Moybane Chapel was presumably derelict for decades when the Griffiths maps were printed in 1864, it still was surveyed and included: 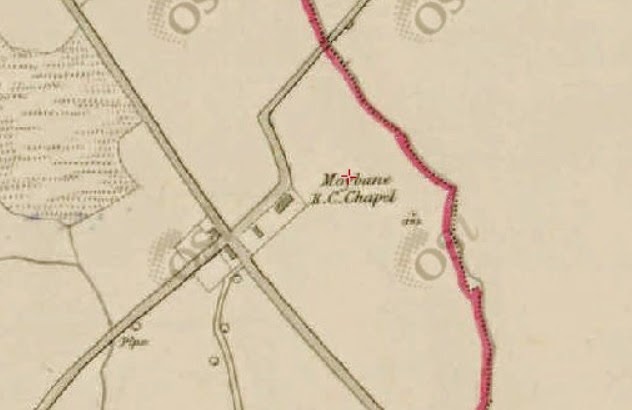 Records show that the Moybane Chapel was replaced by the Monag aka Monug Chapel sometime after 1830 when the local landlord, Thomas Prideaux Ball, offered, free of charge, a piece of hilly ground for a chapel in the townland of Monug. This new location made sense since the population was beginning to migrate to the focal point of the Crossmaglen market. The current St. Patrick’s Church is on the same site as the Moybane Chapel was, and was consecrated, according to the Dundalk Democrat on October 17th, 1875.

Using the 1864 map, I have highlighted both Urker Lodge, where the Jacksons lived, and the Monag Chapel in red. I have also connected the two of them with a green line so readers can trace the route that Thomas Jackson would have taken as he took his old nurse close enough to the chapel for her to hear the bells. The distance between the two is about 2 km.

Last spring, I walked from Crossmaglen along Monag Road to Urker Lodge. It is a lovely walk, about a fifteen minutes or so, past fields of grazing cattle, and with some farms thriving, and some farms looking a little less tended. The Jacksons would have walked along this same road, before it was paved, probably most days when the weather was decent, to visit their friends and relations, or to go to market, do a bit of banking, have a pint, the usual. I only wish that I had been able to stay there longer than the few days I had free to do so. The people were so friendly.

In my next post, I will take some steps towards trying to determine who might have been the old nurse who Thomas Jackson took along the road till she be to hear the bell ringin' in Mobane Chapel an' she'd say her beads there. In the meantime, some photos of the walk:

Posted by SharonOddieBrown at 2:02 PM