Crossmaglen, in South Armagh, is not the easiest place to get into or out of, especially if you are reliant on public transit. I was beyond lucky that my Dublin friend Peter McWilliams had some photos that he needed to study at the Monaghan Museum on the day that I needed to leave Dublin. He offered to do a side jaunt and drop me on my pointed little head in Crossmaglen. He and I always enjoy a good natter, so that part of the drive up from Dublin was a win-win for both of us. So far, so good.

After he and I had a bite at the Cross Square Hotel – I can recommend the fresh bass, locally sourced - he headed back to Dublin, and I went off for a walk. But let me back up a bit, before I proceed.

One of my quests, on this particular part of the trip, was to photograph the bell that had been in the clock that Sir Thomas Jackson had donated to Crossmaglen in 1903. I will tell the longer story in another post, but the short version is that the clock was blown up in July 1974, during The Troubles, and the bell is all that remains of it. I had come expecting to be able to photograph this bell.

This didn’t seem to be terribly complicated, at least when compared to much of what I do. In 1989, the bell had been set up in a special display case in the Community Centre as a gesture, one of many, to help heal the rifts that had played out so harshly in Crossmaglen during The Troubles. When I first arrived in Crossmaglen, it didn't occur to me that there might not be a Community Centre, at least not when I was visiting.

So, I did as one does when faced with such adversity in this region. I went to the nearest pub, Murtagh’s Pub & B&B, which was where I was staying.

I shared my sad tale with Deidre after she had brought me the pint of Guinness which I so urgently needed. Tomorrow, she said,  go to Rosa’s. It’s over beside the bakery. You know the bakery. Just down the road a bit and cross the street. Someone there will know.

The next morning, I popped into Rosas. At first, it didn’t appear that anyone was there, and then I met Darren Rice in a back office. He has an official title which is to die for: Ring of Gullion - Area of Outstanding Natural Beauty Officer. This is why I love Ireland. 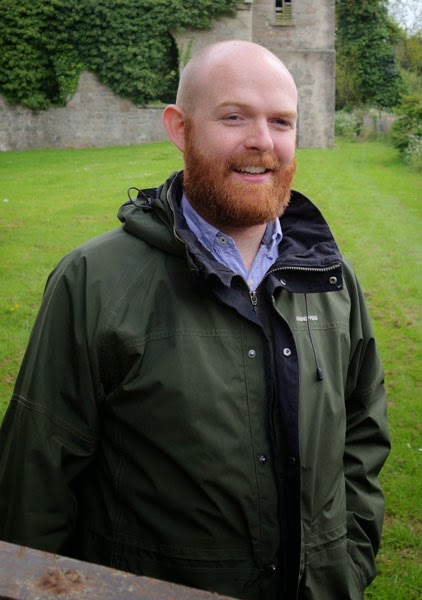 It turned out that the bell was actually in a storage depot in Newry, more than half an hour away by car. Thankfully, a major stroke of luck, Darren offered to drive me there. He had a meeting up that way, he said, and could show me a few things along the way. As he drove, he told me about a whole slew of marvelous projects that were underway, such as those linking children in schools from predominantly Catholic areas with children in predominantly Protestant areas – each sharing drawings of what mattered to them. He talked about his passion for the land, for studying maps, and for developing programs which link story-telling with geography in a way that enriches both.

Already, there has been a huge amount of progress in the Slieve of Gullion region with projects such as The Poets Trail. Now that I know about this trail, and others, it is clear to me that walking these trails is one more thing to add to my bucket list. Just bring a good rain hat and jacket. The weather is unpredictable. As they say, It'd be a grand country if it had a roof. 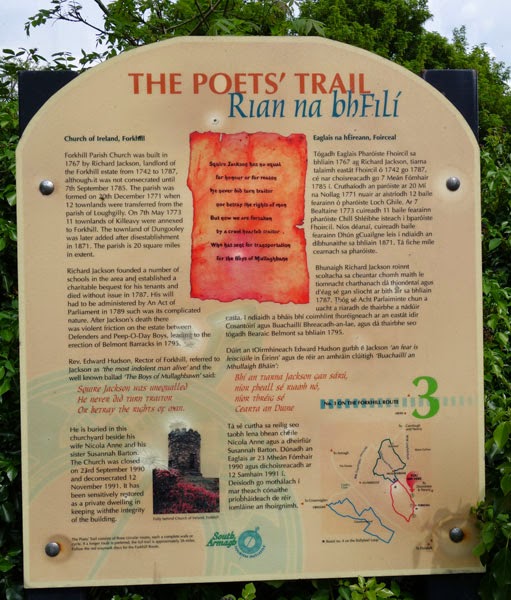 At St Jude’s Church of Ireland in Camlough, we met up with a staff person who was organizing a team of volunteers to clean up this ruin. There are plans to include it as part of a future trail for tourists from both near and far. It is a good choice, in part because this is an odd church. It was built in 1773, consecrated September 9th 1785, and then abandoned about a decade later because most of congregation had already migrated from Camlough to nearby Bessbrook. 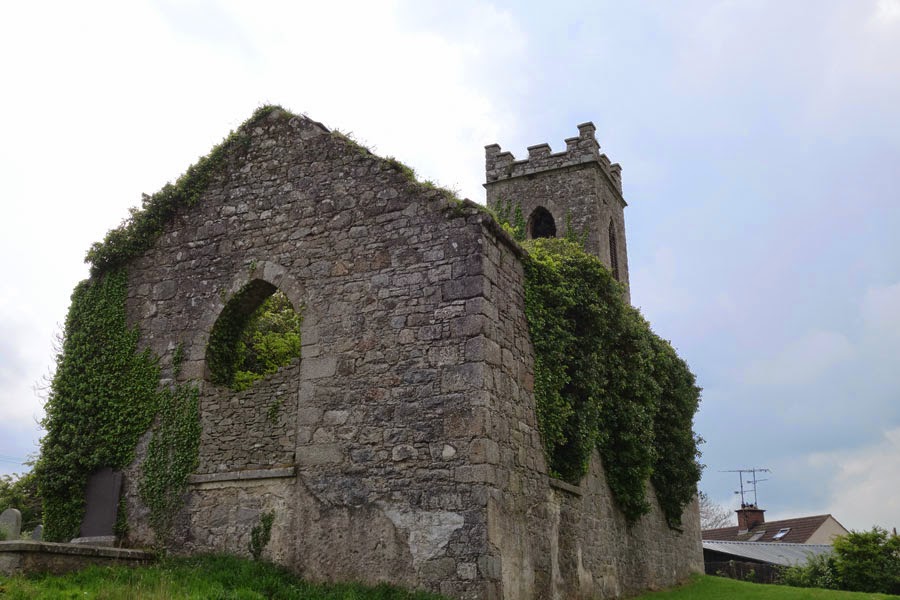 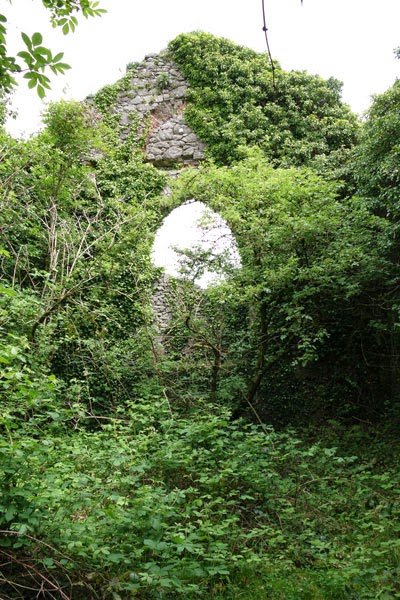 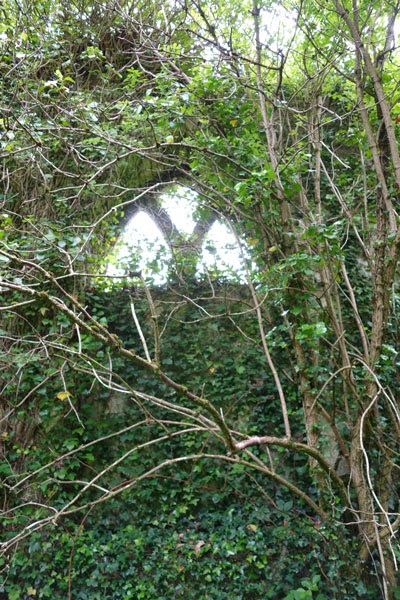 Of course it would not have been a typical day for me had we not met up with a locked gate when we first arrived there. Not that this stopped us. I do this kind of scramble quite often, but rarely have a willing photographer on hand to record my transgressions. 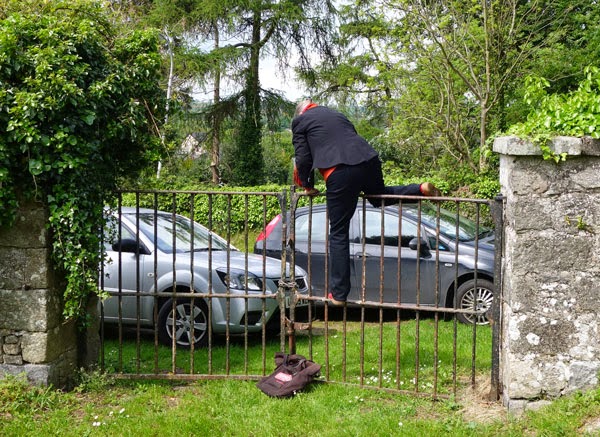 And yes, in the next post, I will get to the story of the bell, complete with photo. I promise.

Before I leave Crossmaglen though, I want to share another shout-out of thanks, this time to Eugene Lynch. When he heard that I was planning to take the bus from Crossmaglen to Armagh, he insisted on driving. It was totally out of his way, but that didn’t faze him. It did make the world of difference to me, since it gave me a full working day at the Local History Library in Armagh. What would have been a half day trip, with an awkward connection in Newry, turned into a very pleasant half hour drive, again with lots of great chat.

Posted by SharonOddieBrown at 12:11 AM