The Tale of a Townland

Maps of Irish parishes don’t only teach us about the boundaries and locations of townlands, but can also help us to rethink what we know about them. If you can bear with me, I will walk you through some of the maps which did just that for me with respect to one townland. It may be too tedious to follow all the particulars, but the older maps are still fun to look at, just for the feel of them. So, scroll on down, and enjoy.

First a bit of history. In the mid-1600s, the costs of war were not funded in the same way that nations tend to fund wars today - through taxation. Back then, if you invested your time or money to support the winning side in a war, then you were rewarded after the fact with payment in land. The Down Survey maps of 1656-58 were commissioned to determine how much land to award to those soldiers and adventurers who had been on the winning side of the Cromwellian conquest. Obviously, that land had to come from somewhere, and in this case, most of it came from the defeated Catholic landlords.

One day, I decided to explore the history of the townland in the parish of Creggan in South Armagh where the future Sir Thomas Jackson was raised in the mid-1840s. His parents had leased the fields for their farm from Thomas Prideau Ball and a couple of other landlords. Following the inter-generational lineage of such leases can be quite revealing. A mixture of maps and deeds provide the keys.

In the mid-1600s, the townland of Urker aka Urcher, which the Jackson’s first leased in the late 1700s, was called Orcher. These kinds of name-changes present a challenge when it comes to Google searches. I often resort to the advice that my brother Struan gave me in 1995 when I was trying to understand a story being told to us by a farmer with a thick Co. Tyrone accent. Start with the consonants, my brother said, and then substitute vowels. For example, when this Tyrone farmer had said the word floorboard – which we would pronounce as: flɔː/ bɔːd/, his version had sounded to us more like fleurbird. The spelling of townland names up until the 20th Century is pretty much like this. You have to play with it.

The townland of Orcher is in the Parish of Creggan, and in the map beneath I have highlighted it in green to make it easier to see. In 1641, it had belonged to Henry O’Neile jr., aka Sir Henry O’Neill. He lost it to Thomas Ball, an ancestor of the Thomas Ball who was still holding the lease some 200 years later. In the Cromwellian aftermath, the elderly Sir Henry was deprived of all his Co. Armagh land holdings, which were considerable, and lived out the rest of his days in Co. Mayo with about a third of the assets that he had owned before the war. 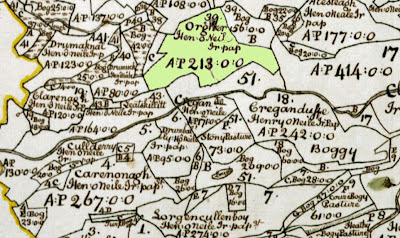 For reasons unknown to me – although I am sure someone out there has the answer – old maps are not always oriented with North at the top. Like Beta and VHS – it seems that it took a while to standardize the format (not to mention DVD, Blu-Ray and whatever). To save you the trouble of having to tilt yourself 90 degrees, here is my version of this map with North at the top. It is easier to see it this way when you need to compare it with later maps. 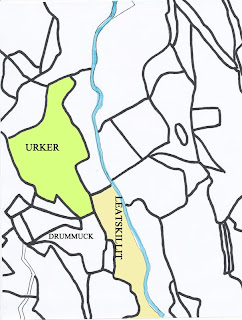 Once I was clear about exactly where Urker was in these old maps, then I did a search on this site by Landowner name: O’Neil, Henry. Since O’Neile had a gazillion holdings in the Barony of the Fews, I played with the zoom feature until I found Orcher. Once there, I could then overlay the 1890 version of that townland and its environs, but the result of doing this was puzzling. It now looked as if Urker Lodge had been moved into the neighbouring townland of Drummuck. 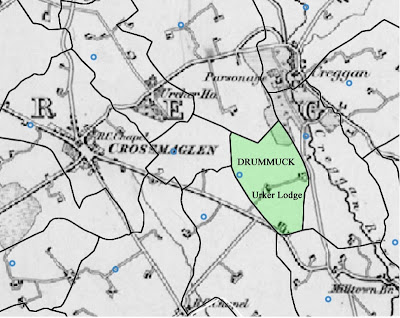 Well, it did, and it didn’t. In this instance, the two versions of the townland boundaries had to straddle a series of townland border changes. The 1850s map is definitive when it comes to the placement of Urker Lodge: 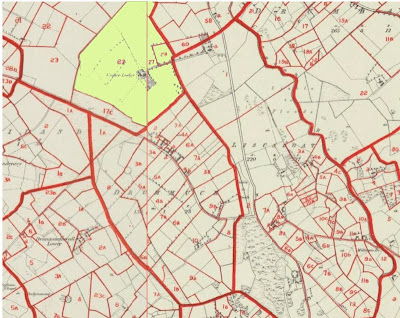 In an 1838 map available at Mapco, Urker Lodge is not mentioned, which is not surprising because it was likely not more than a cottage at that time, but it would have been located beneath the m in Crossmaglen. I have added the name in red. If you go to the Mapco link, you can see the townland in a larger context. 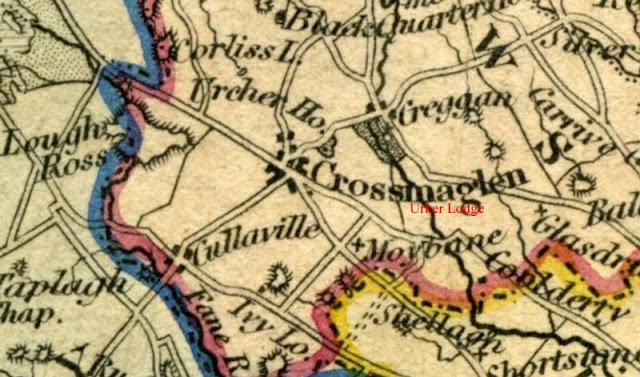 Jumping around time-wise, one other map that is worth consulting is the 1875 Geological Survey map. I got a few of these maps years ago when I was in Dublin, but they are now all online, which is very exciting. Thank you Ireland!

In this snippet, I have superimposed street names and the names of Urker Lodge and Liscalgot to make them easier to see. I am a novice when it comes to adding lettering to photos, so even though I figured out a great colour to use to highlight Liscalgot Road, I couldn’t replicate my success. This means that the other labels are not as clear. If you are curious about the geology of the land around Urker, it is worth first looking at the legend on the right hand side of the Dundalk map, and then reading page 27 of The Ordnance Survey Memoir which gives more detail about the surrounding area. In short, there are lots of rocks in Creggan parish. No surprise. The name Creggan supposedly comes from Carraig-an - which means rocky waterfall. 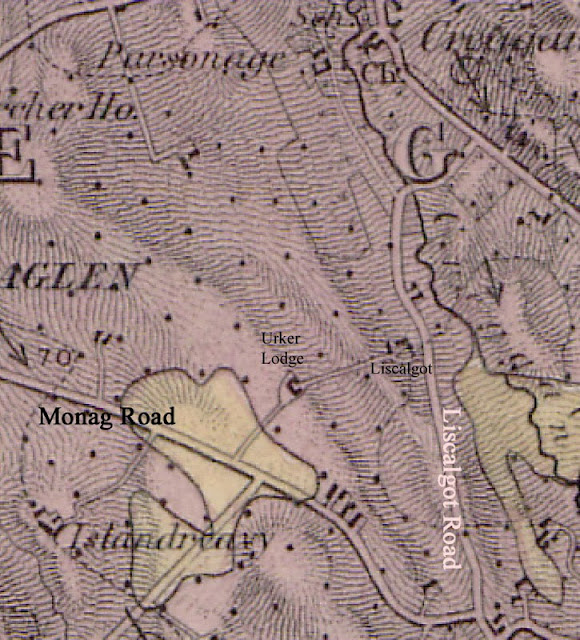 Shifting into more contemporary times, I also found it intriguing to compare the ordnance survey maps which showed Urcher Lodge in 1982 and 2002. In 1982, the driveway from Monag Road leading up to Urcher Lodge is well defined as is the lane leading from Urcher Lodge to Liscalgot. By 2002, the second lane is no longer shown.

Had it disappeared? The answer is in a Google Earth. First, here is a look with the townland boundary super-imposed (I have added the name Urker Lodge): 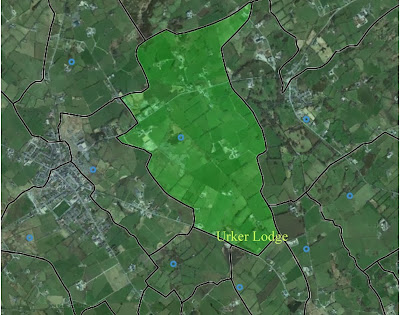 And here is a shot showing a close-up of the current layout of the property - both lanes visible: 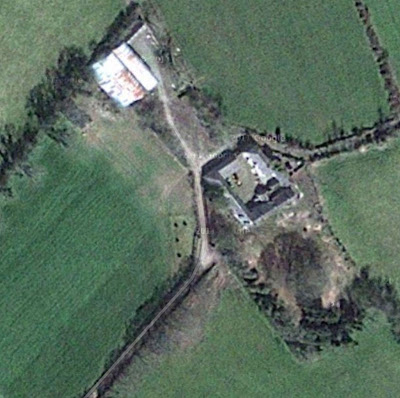 Why all this fuss over such details? Is it really worth the candle? I think so.

First of all, as a result of pouring over these maps, I was triggered to do some further reading about Sir Henry O’Neil aka Neill aka Neile. It made me suspect that far-fetched relations of his had intermarried with the Jacksons of Coleraine, perhaps more than once. More work, coupled with more luck is needed in order to run this to ground.

Secondly, I find it intriguing that there are only two men associated with Creggan parish who have ever been knighted: Henry O’Neile who inherited the title after the death of his father in 1640, and Thomas Jackson who was knighted in 1899 because his life-long work in international finance and philanthropy in Hong Kong. What are the odds that both of them would have one more thing in common – that they each held leases to Urker at some time in their lives?

Thirdly, and perhaps the most important thing, is that I can now start working out what Urker Lodge might have looked like in the post-famine years when the future Sir Thomas was a young lad growing up there. I will write about this in a future blog. CLUE: The house was smaller than we might have thought, at least if we had started out basing our estimates on pictures from the 1970s. That’s what I had been doing before I looked at these maps. Oops.

TALES BEHIND THE NAMING OF URKER: One tale is that the name of the townland of Urker came from Urcur, and meant: The town of the throw or cast. There is a story that the legendary giant, Finn McCoul, threw two stones from the Slievegullion mountains, one of which landed on Urker Hill, and the other at the nearby townland of Carran. John Donaldson, writing about this in 1838, said that both stones were placed on their ends, and each of them were several tons in weight. Even though Donaldson is one of those who recounts this tale, he actually thinks that it is more likely that the name of the townland had more to do with an old burial custom which pre-dated Christian traditions. It was common to carry a stone to be thrown into a cairn or heap in memory of a deceased person. These cairns accumulated, and were in such abundance that the Ball landlords were known to have used them to build dry ditches and walls. Clearly, cultural sensitivity was in short supply.

A FINAL NOTE: There is remarkable continuity of both ownership and tenancy in this region. A document showing the 1692 dividend for Lt. Thomas BALL, indicates that this townland was clearly still in the hands of the same family as it had been in the 1656. By the mid-1800s, the descendants of the first Thomas Ball still held the leases for Urker, and Sir Thomas Jackson’s grandmother was one of the lessees. It is also worth noting that the first Thomas Ball also held land in trust for a Daniel Jackson, and Sarah Jackson, orphan minors of John Jackson. I can’t prove it yet, but I suspect a connection between these Jacksons and the Jacksons of Urker. The clues are likely to be found in leases of either Tulleyagallaghan or Tullyvallen. I plan to get on to that during my next visit to Dublin. Update: Tullyogallaghan aka Boggy Mountaine Pasture - in 1641 it was held by the church.

Posted by SharonOddieBrown at 2:45 PM