In My Pocket – specially for Kinga

Whenever I am heading out to enjoy an especially great time, my friend Kinga always demands: Keep me in your pocket. I assume that she means the one without the used Kleenex. A certain amount of class matters, although she is much better at matters of class than I am. This year, it was the only way she could join me at the Vancouver Writers Fest. For others who also missed it, I have decided to share this post with you. Imagine that you too are tucked into my very crowded pocket.

Event 49: In the Beginning.


As I sat in my seat, six rows back, listening, I found myself wondering about how we talk about transcendence and grace in our secular age. None of the writers talked directly about this, but they didn’t have to. Their experience of it was revealed in the spaces they left for us, the reader.

In between bits of the readings, my mind bumbled on and I found myself thinking of that wonderful phrase: sprung time. I just Googled it because I have always attributed it to Gerard Manly Hopkins, but it turns out that I have misremembered. His phrase was sprung rhythm not sprung time. Not to worry. I am sticking with the phrase that I seem to have invented. For me, it captures that kind of time that is abrupt, unexplainable by any kind of logic, and which feels like eternity in an instant. For reasons that elude me, it is often transformative, in life as in art.

Poets such as Anne Sexton and Mary Oliver and painters such as Mary Pratt don’t tell us: I opened the fridge. I took out a lemon. I closed the fridge door. Instead, they capture the beauty of the lemon, the scent of it, the heft of it in our hand. They enable us to remember what it means to be in that space beyond language, a space where conscious will is gloriously absent. At this event, all the writers took us there. We got glimpses of how this kind of space transformed them, so they could first absorb and then live beyond the loss of a brother, a mother, an addiction. Each in their own way, they had us in their pockets.

Had I not had been cursed by a stupidly nagging cough that would not cease – hence the pocket with the Kleenex in it - I would have asked them: When you are writing, do you ever consider how to write about transcendence and grace in a secular age?  I am still curious.

Afterwards, readers voted with their feet and their wallets, and lined up to buy dozens if not hundreds of books. More than a dozen also stopped to thank Andreas Schroeder, moderator of the event. After all, my spousal pontoon acquitted himself very well, as always, and Kinga, when you peeked out of my pocket, the one without the Kleenex, you thought so too.

I won’t take the time to cover all the events that I attended during the week, but here is a quick fly-past of two other authors whose writing has had me riveted ever since.

Event 33: Worlds Arising, Worlds in Peril. and Event 75: An Hour with Eleanor Catton. 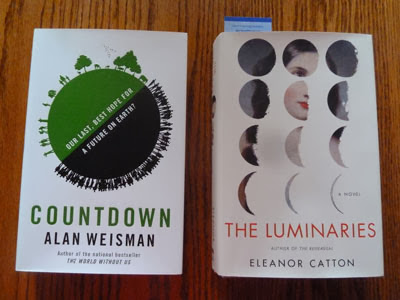 You might not think that these two books go together. Alan Weisman’s Countdown is about avoiding environmental collapse, and Eleanor Catton’s The Luminaries is a novel set in Victorian-era goldfields in New Zealand. My link between the two is because of a comment made by Alan Weisman at one of the week-day sessions held during school hours. I always make sure to get tickets to at least one event that will be chock-full of kids. I find that the pre-event buzz is always so vital, so infectious. Also, when it comes to their questions, they don’t tend to flaunt their egos, as sometimes happens at adult-dominated events.

One student asked Weisman, What is the best thing to do as a non-fiction writer? His response: Read fiction. Spot on. Thank you. For me, I would also add: Read poetry.  The reason that I have linked his book with The Luminaries is that I can’t think of a better piece of fiction for a non-fiction writer to be reading while doing their own writing. Maybe Weisman is reading it already.

It turned out that I really didn’t need to keep Kinga in my pocket. She showed up at every event, flashing overhead in the slide show of pictures from last year. 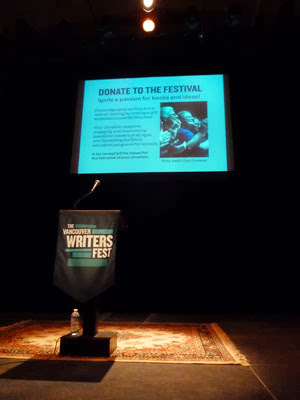 My only regret of the festival? I should have bought a ticket for Morgan - Son of The Kinga - for the Anne Carson event. She opened her reading with Christmas with Hegel, and for my money, if she had done a repeat read of that essay at the end of her presentation, I would have been just as transfixed as when I had heard it an hour earlier. Daughter Sabrina Schroeder would have loved that event too. Anne Carson's shoes? They also deserve a mention.

Oh, well. At least Katherine & I got to channel Kinga’s energy at The Literary Cabaret. We missed her. Andreas did too. Next year. 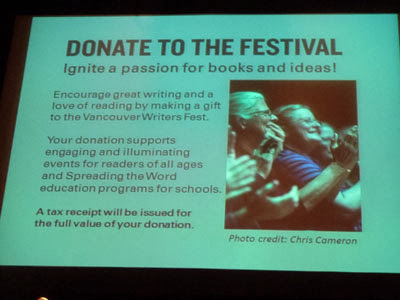 Posted by SharonOddieBrown at 8:57 AM