I can’t recall who had the thought that I should make sure to see this particular embroidery, but whoever you are – thank you. Seeing it in the flesh was a stunning experience. My only regret is that I couldn’t spend even more time absorbing the feel of the detail. It is huge, measuring: 5’ by 9½’. Thomas and Matthew, two of the archives staff, had to set out close to a dozen banquet tables before unfurling it for our viewing. 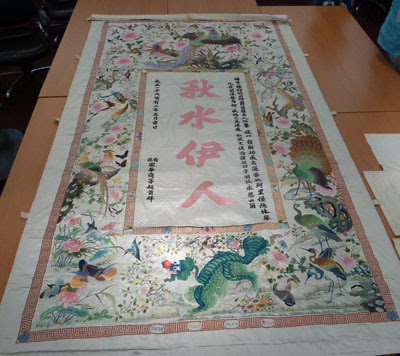 A 1902 news account described the attempted presentation of this embroidered scroll to Thomas Jackson in Hong Kong at a banquet celebrating his life in the Colony. I say attempted, because the embroiderers, Kam Lun & Co. in Canton, were unable to complete the work before Jackson had to sail for England. Robert Ho Tung, the merchant who hosted this tribute to Jackson, explained: ... we are handing you the address in its present form, as it has not been possible for us to get the embroidered work done in Canton in time before your departure. It seemed to us that, got up in characteristic Chinese style, the Address may be a more interesting memento to you from the Chinese. 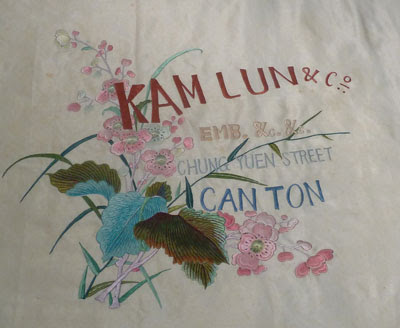 We should be thankful that Kam Lun & Co. cared enough about their craft that they didn’t do a rush job. This embroidery is nothing like one of those mass-market embroidered scrolls that can be found these days in great profusion in some of the lower priced stalls at Stanley Market. It is a superb work of art, both in its design as well as its execution. Every individual stitch that was sewn into the silk backing was perfectly executed. It took thousands upon thousands of stitches to produce this final result. I would love to know more about Kam Lun & Co., but our dear Brother Google is silent on this score.

I also regret that my photos of this embroidery don’t entirely do it justice. In real life, each bird, each flower, each creature, each embellishment looks as if it had been painted on the silk, not stitched into place. The stitches are so fine that a viewer actually has to be as close as eight inches away before being able to discern the individual threads. At home, I have enlarged the photo, which I have in a higher resolution than I am able to share here, and have studied the progression of individual elements. Unfortunately, I do not know enough of the meanings of peacocks, herons, dragons and the like to be able to tease out a narrative. I suspect that there is an intention behind the placement of each element, and hope that someone reading this may have a clue or three that they might be willing to share. 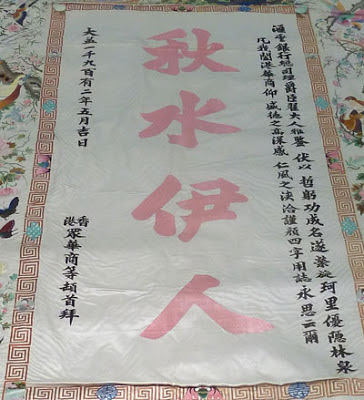 All I know so far about the meaning of the four large characters in the middle of the embroidery comes from a letter where it is said that they are intended to be read as a metaphor: He is the man of whom the poem “Autumn Winter” reminds one. The letter writer added: Written on a lucky day in May 1902. If anyone out there can translate the other words which are surrounding the four characters, I would be most grateful. I am also curious about which particular poem of the thousands of Chinese poems that mention Autumn Water that this one might be. I have tried to find it online, but am none the wiser. There are too many of them.

On last thing. Yes, this embroidery was commissioned to honour the banking accomplishments of Sir Thomas Jackson, as well as for his significant volunteer and philanthropic efforts, but that was not all. More importantly, as Robert Ho Tung stressed in his presentation, it was also because of the kindness and sociability that Jackson had extended towards the community of Chinese merchants. In the long run, I get the feeling that this is what mattered most to many members of the Chinese merchant community. They had counted Jackson and themselves not only as colleagues, but also as friends. 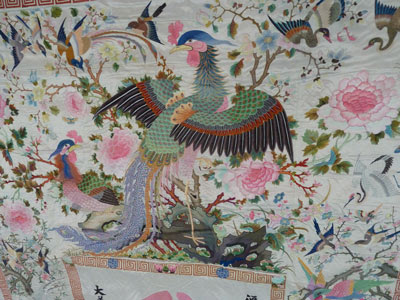 Thanks to Helen Swinnerton, Senior Archives Manager of HSBC Archive in Hong Kong; Matthew Edmondson, Manager Archives Collection and Thomas Warren, History Manager - both in Hong Kong; Tina Stapes, Global Head of Archives, London. Annelise Connell who made sure I took the right public transit in order to arrive where I needed to be.

Posted by SharonOddieBrown at 3:14 PM