Pierre Berton was not only a top notch, popular history writer in Canada in the mid-20th Century, but he was also renowned for his personal generosity. Once he donated considerable coin to help fund and make possible a conference for writers, some of whom had publicly accused him of being a privileged, racist, old, white man. It takes real generosity of spirit to realize that when people make such hurtful comments that it might be because of their own hurts, and also that it is worth learning more about the source of their pain. Pierre was that kind of guy with that kind of spirit.

For many years, he and his wife Janet also hosted the AGM after-party of The Writers Union of Canada at their home in Kleinberg. The food was spectacular, and many of the recipes can be found in the cookbook they published in 1974. At the first of these parties that I attended, I was 28 years old, and had been invited as the common-law spousal pontoon of Andreas Schroeder. Close to forty years later, we are still each other’s spousal pontoons. And a good thing that is. 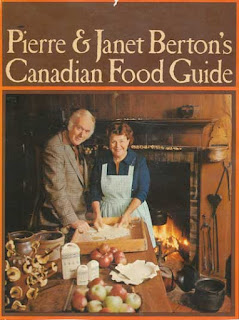 At this particular party, the food tents were set outside, and the drinks were served indoors. The chat amongst the writers became more brilliant and animated as the afternoon wore on. Pimms #1 was the secret, a beverage that tastes something like a mix of dry sherry, orange peel and then a hit of brandy or gin. Waiters clad in black and white uniforms glided around the living room with countless bottles on hand. There was no such thing as a glass half full. Time and again, I was so intent on either talking or listening that I hadn’t registered that my glass had been refilled.

It was only when I excused myself to go to the washroom that I realized I was in trouble. My clue was how hard it was to locate the lever in order to flush. Returning to the living room, I took Andreas aside, and suggested that we had better leave before I disgraced myself. He agreed, though he claimed not to be similarly afflicted. We said our goodbyes, the door closed behind us, and both of us strolled out to our car. Or we tried to. Twenty paces off the porch, a slight decline in the lawn caught us by surprise and we both went ass over tea kettle. Driving back to Toronto was clearly not an option, at least not right away. We hid out in our car, seats in the recline position, and chatted until dusk.

I think of Janet and Pierre, and other such stories, every time I cook from their cookbook. It could only have be written after raising eight children on a limited budget and entertaining dozens on weekends on a regular basis. No wonder the first chapter is called On Tribal Feeding.

A few weeks ago, I was asked for their salad dressing recipe after I had used an adapted version for a cohousing meal. It has many uses. It is thick enough that it can also be used as a spread on sandwiches. With a few tweaks and omissions, it can even be made vegan friendly. Here is my take on it, modified so that it works for both vegans and vegetarians.

Toss the dressing with:
Posted by SharonOddieBrown at 3:13 PM