A Walk in the Rain.

On the days when I am inside, looking out on a rainy, grey day, the very idea of a walk is uninviting. Last weekend was no exception, but as soon as I had walked past the first couple of houses, I welcomed the feel of the rain on my face.
Encouraged by a suggestion from my eldest daughter, I decided to try a walking meditation, not that this worked. My plan was subverted by beauty. The freshly unfurled blackberry leaves at the side of the road were a softer green than the leaves on last year’s wood. They invited my touch. Later, I had to stop and photograph a camellia in the garden at Roberts Creek Cohousing, where my youngest daughter lives in a village of some thirty one homes. 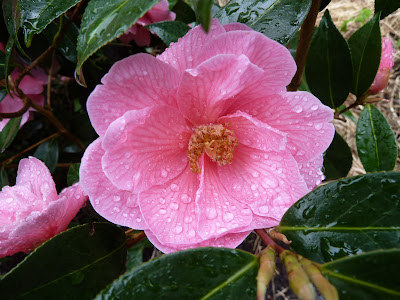 On the way back home, I tried the walking meditation thing again, but it was another glorious failure. This time, after less than half a dozen steps, the old brain started chattering about neighbours, and neighbourhoods, and how we both create and sustain them. This train of thought was derailed by the screech of a polished grey Mercedes peeling out of the parking lot in front of the Roberts Creek General Store.
My mother used to call people - such as this grey haired man at the wheel of his Mercedes - the summer nuisances, but it is much more complicated than that. Some of those who visit here simply take a little while longer to slow down to the Roberts Creek pace of life. I am still working on this myself. It amused me that this particular man was not even steering his car with his hands as he sped past me, but was engaged in fastening his seat belt. In no time at all, he had to brake for the stop sign, which is not much more than a hundred steps past the store. You’d never see a Roberts Creek neighbour try that particular trick.
As I walked home, I put thoughts of him aside and inhaled the smells of my neighbours’ Sunday cooking, a glimpse as it were. From one house, there was the scent of a hot caramelized crust of a cake, probably just about ready to come out of the oven. It is a smell that I can recognize from a hundred paces, having made a cake or three in my time. The scent from another house a little further along indicated that there was a meat dish on the go. I breathed deeply and absorbed the ping of rosemary oil as it melded with the darker, richer scent of the meat.
It isn’t that I know much about these neighbours who live a block or more away from me. From time to time, an ambulance pulls up in front of one of these houses, and later on, someone at the mailbox will say, oh that was old widow ____. Still, I know them through their gardens, the wag of their dog’s tail, and through the scent of what they cook. Sometimes when I walk at night, I see more than I ought to, when they don’t close their drapes and are unintentionally backlit. In return, they probably catch me in various states of dress or undress when I too pass by an undraped window. Yeah, well ...


I often think of what neighbourhood meant to my great-great-grandmother. Her home was on a hill, at the end of a long lane in southern Armagh, Ireland. The house looked onto a courtyard bracketed by stables and such. Her children walked everywhere, but she wouldn’t have, at least, not at my age. People came to her. Her home was known to be always full to bursting with friends, family, farm staff and indoor servants, not that there were many of the latter.  All of these people would have known each other for generations. Their children played together. The hired help were the sons and daughters of men and women who had in their time been servants to her husband’s mother. Everyone knew the names of first cousins, second cousins, aunts, uncles, the whole catastrophe, as Zorba the Greek would term it. Only the fancy meals were served in the dining room, with staff eating separately in the kitchen.
It is much quieter in my home today, except for the background hums, which are not of people but of machines. My stove, my washer, my dryer, and my computer assist my work just as my great-great-grandmother’s servants made her work more productive, but there is a disconnect. The people who make my much needed machines are scattered all over the globe. I haven’t a clue how they fare as a result of having made my stove, my computer, my washer, my dryer.
It is hard in our time to be rooted in both time and place, but this is not new. In the mid-1800s, there was a mass exodus from Ireland. As in most times of economic collapse, it wasn’t the poorest of the poor who fled, for the most part, but it was those who had the means to leave. My great-great-grandmother had one son who moved to Hong Kong to work, and another one to Yokohama. I too have a child half a world away, my daughter Sabrina, but at least I can hear her voice on a regular basis on the telephone.  I can absorb her delight when she tells me that she is completing a composition for an ensemble that will be performed in Boston, then in Metz, then in Stuttgart.
In my part of the world, we do enjoy our time with our on-line neighbours, as well as time with all our close family and friends – most of whom are not our neighbours. Still and all, there is a loss when so few of those who matter most to us live nearby. It means that when I walk in the rain, I can only imagine how the cakes or roasts of all my cherished non-neighbours might smell on a rainy Sunday afternoon. I can only imagine what new leaves are unfurling, waiting to be touched. Thankfully, I do imagine such things, when I am walking - in the not-meditating way that I do.
Posted by SharonOddieBrown at 1:02 PM