Everything must be taken into account. If the fact will not fit the theory---let the theory go. Agatha Christie.
First of all, I want to start with thanks. Mike is one of those RAOGK –Random Acts of Genealogical Kindness people who makes notes of deeds in order to help out total strangers such as myself. We finally met in person on Sunday March 20th and spent a delightful couple of hours in the Vancouver Public Library, the two of us decoding bits of old deeds on microfilms that he had ordered in from the LDS library. It takes skill to decode the handwriting and many of the arcane legal machinations of the 18th & 19th centuries, but Mike has much of it down pat.
Recently, he sent me some of his transcriptions that mentioned land dealings of some of the JACKSONs in Ireland in the late 1700s. He has also sent them on to be uploaded on Nick Reddan’s site, and in a few weeks – when I can get to them -  I will also post them in an updated version of my deeds chart. For now, I just want to illustrate how I work with deeds, such as these, to make, dismiss, or verify family connections.
Two more points.
NOTE: Geek alert – this rest of this post is directed at moles such as myself who scuttle about in archives.
JACKSONs in CO. DOWN & AMERICA
I had already assembled some information about the JACKSONsof Co. Down.  They are the line that connects – somehow – to President Andrew Jackson. The deed dated 1789 Oct 31,mentions a Samuel JACKSON who would likely be related to John JACKSON (1639-1716) & Janet JACKSON (abt 1641-1695) of Ballyskeagh, Co. Down – possibly a grandson. Here’s what the deed says: To enable Letitia ORR, spinster daughter of Mary & John ORR to make valid title of lands (not named) unto Samuel JACKSON  for ever, Mary ORR (widow of John ORR late of Killyneather, dec'd.),  James ORR, Mary ORR (wife of James ORR) Letitia & Mary ORR, spinster daughters of John & Mary ORR quit their claim; and annunities on sd lands will be transferred onto other lands of William Bruce ORR.
JACKSONs in CO. MEATH, MONAGHAN & AMERICA
This next deed from November 22nd 1788 has shed more light on the HENRY family who married into the JACKSONs of Lisnaboe, Co.Meath, and later of Ballybay, Co. Monaghan, and then of America. It makes me curious if this is the same line of HENRYs who married into the DONALDSONs and COULTERs of Co. Louth and Armagh. Alexander HENRY is particularly interesting. For more on these JACKSONs, see also: http://farrell-family.org/
1788 Nov 22. While marriage sett had upon death of John HENRY, Alexander JACKSON, linen merchant, Clon_illan, Co. Monaghan receiving equal part of estate of John HENRY of Broomfield, Co. Monaghan for 5s ster John HENRY grants his part of Alexander HENRY of Richardstown, Co. Louth, eldest son of John HENRY & William HENRY, 3rd son of John HENRY, Thomastown & Littledickin, Co Louth, then in possess of Anthony McDERMOT & Zacharia MAXWELL subject to charge of sd sum of £300 (see Alexander JACKSON) in trust, for use of John HENRY , forever.
Anthony McDERMOT & Zacharia MAXWELL were in possession of lands of Thomastown & Littledickin, Co Louth as granted by John HENRY to Alexander & William HENRY in trust.
As to other children of John HENRY, Alexander JACKSON agrees to waive benefit in lieu of £300 to be pd on John HENRY's death, and grants Alexander and William HENRY for 5s ster lands of Clo[nw?]_illan, Endso and B[ow]elk, MON in trust for sev'l uses & for £90 jointure for Mary JACKSON or £60 for Mary JACKSON on death of Alexander JACKSON.WITNESSES: John HENRY the younger (presumably the second son of John HENRY sr.), Linen Merchant of Lisnagoan, Co. Cavan. 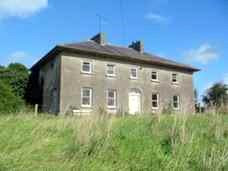 I was also just sent this picture of John HENRY's home from a reader, Roisin, in Dublin. She sent it as a result to a post I recently did to a Monaghan rootsweb list. She also added more background: The Henry family was English, came to Ireland and farmed a large collop of land( a number of townlands) on part of the Bath estate  in Co. Monaghan somewhere in the area along the N2 between Carrickmacross and Castleblayney and close to the Armagh border. I just don't know what townlands were included in his ownership.  This estate was given the name of Broomhill after his own home in England. Over the years the word became corrupted to Broomfield. There is_ no townland named Broomfield._ but there is a Post office of the name and also the Catholic church is now known as Broomfield.....years ago the church was known as  Taplagh as it was built in that townland. I am enclosing a picture of the house when it was sold about 10 years ago. This is what remains of it as it was derelict for a number of years. . I know that the Henry family was linked in with the Johnstons of Aughnamullen. I totally love how we all learn so much in this new inter-connected world. Thank you Roisin!


QUAKER JACKSONs OF CO. CORK
Much of the early history of what I have grouped together and called the Quaker Jacksons is based on pretty far flung conjecture – too far flung even for me to accept in a leap of faith. The most niggly parts of it have to do with claims that the Irish Quaker line connects the JACKSONs of Mountmellick to the Killingswold Grove JACKSONs of Yorkshire. On my web site, I have depicted the tree going back to Richard JACKSON (1505-1555) of Yorkshire as many pedigrees claim, but have added serious caveats for much of the early evidence. Hopefully, I do not lead the innocent astray.
Another line of Quaker JACKSONs, who do not yet click into the first group of JACKSON Quakers, are connected to Strettell JACKSON, a Quaker based in Co. Cork. Various aspects of his line of JACKSONs are worth our attention, but one thing that stands out for me is the connection between his line of JACKSONs and the JACKSONs from Fanningstown, Co. Limerick and Duddington. Another thing that intrigues me is that his family was alleged to have come from England and settled in Cork in the early 17th Century – at least according to Portraits of Eminent conservatives and Statesmen, with genealogical and historical memoirs. Henry Thomas Ryall, London. 1836.
For those of you whose eyes have not already glazed over, there is way more detail concerning the JACKSONs of Co. Cork – seven pages more. To make it easier to access, I have posted all of it on my web site.
Posted by SharonOddieBrown at 3:58 PM