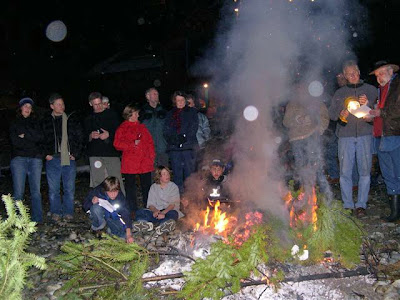 Twenty seven years ago, in the midst of all the detritus of Christmas wrapping paper and such, I came upon something that struck me as a great and glorious idea, an idea that has prevailed even up to this day. Someone had given me a book on Christmas traditions. I took an idea from here and another from there, and bingo, the Schroeder-Brown 12th Night tradition was born.

In pre-literate times, people sawed off circles of wood from the base of the Yule log, drew crude drawings on them, and threw them into the fire. I reasoned that our pre-school friends could do that part, while the rest of us, being literate, could instead write down everything that we wanted to burn and leave behind. Believe me, I had lots that year.

The Christmas season of twenty seven years ago had not been our most stellar. On the day of my birthday, November 8th, Andreas and I had learned that Vanessa, our youngest daughter, had a syndrome called Cornelia De Lange. We had also been told that she would only have a 50/50 chance of living past the age of two, and if she did, she would likely be profoundly retarded, and autistic. Much of this was wrong, but we didn’t know that then.

Another kicker was that my mother –only in her mid sixties – was dying from bladder cancer. For most of that Christmas season, I had to make a conscious effort every single day to haul myself up out of the depths of despond. There was after all, my husband and our other daughter, Sabrina, age three, to think about, as well as Vanessa. Everyone deserved the best. So did I.

Understandably, there was an air of desperation behind my need to have our Christmas tree burnt down to absolutely nothing that year, along with all the wrapping and left-over boxes. A massive conflagration felt as if it was just what the doctor ordered. At the time, we lived on a mountaintop outside Mission, BC, so this exuberance of fire was entirely possible. I called all my friends, and told them to save their trees. We were going to have a party, one hell of a party.

The food I settled on that year was northern European in origin: sauerbrauten with gravy thickened with ginger snaps, spaetzle, rotkohl, and gingered carrots. We also drizzled rum onto a cone of sugar, and held it with a set of tongs over a pot containing warmed, spiced wine, and set the cone alight. More rum was added as needed to keep the flame going. Whether the end result was any good was immaterial. After a glass of that, everything was good.

That first year, we also made a cake called the King and Queen of Bean Cake. Sabrina wrapped a penny in parchment – more visible than a bean – and she hid it in the cake. The person whose luck directed them to that particular piece would then have to host a party at their place in a month’s time. This too was a perfect addition to that time of year when days are short, night is long, and we all need to be shaken out of our mid-winter gloom.

Since then we have celebrated Twelfth Night every year, except for the one year when we lived far away from home. Much of it continues on in the same manner. Andreas ignites his accelerant-assisted fire, and one of us recites the line from a poem by Robert Bringhurst where Moses says: And the bush burned as they said it would. Then Andreas, bless him, usually comes up with a rant of some political nature, where we all participate in a call and refrain that makes fun of the foibles of whoever is in power. Occasionally, these targets are people and parties that other friends have actually voted for, but they all roll with it. We are an eclectic lot.

As the children grew into their teen years, the event changed in tune with their changing needs. They would often write two lists to be burned in the fire. One of them would be a hilarious litany of the various misdeeds of their parents and teachers, while the other would be private, and much longer. The many pages would then be crumpled and slipped into the flames by their gloved adolescent hands.

Since we moved up to the Sunshine Coast, we have added a new ritual, thanks to our new friends of Danish ancestry. This involves wearing horns and singing The Viking Song, after which a square of pumpernickel with pickled herring – or cheese for the vegetarians - is washed down with a shot of Aquavit, followed by a mouthful of beer. A few rounds of this, and even the non-drinkers are off to a roaring start. It is that infectious.

One of our friends, Katherine was only a month old when we had our first 12th Night. She has been at every one of them since, and is now recently married and qualified as a chartered accountant. She and husband Peter are talented musicians and for the past few years have started us off with rap music, some of which is composed specially for the event. Last year, they took aim at the foibles of us aging Boomers – and hit us spot on. This year, who knows, but I have heard rumours and can hardly wait.

Every year is somewhat different, with an ever-changing cast of participants, but many of the participants are veterans and a dozen or so of them will sleep over – along with Max, the dog. As for the rest of it, all I know is that much food will be consumed, laughter will ring out and the dried up tree will burn as they said it would. At the fire, hopes will be celebrated, grief will be burned, and faces will shine in the reflected light of the flames. Also, before various desserts are served, Andreas’ fireworks will arc overhead. After that, the dancing begins.

And Vanessa - who now works at Canadian Tire, and lives independently in her own house, will be right in the thick of it all, enjoying every minute and dancing with family and friends till the wee hours of the morn. Even us old farts will get up on the dance floor, and shake our considerable booty. Who knows how long it will go on into the night? We will definitely know that we are done when the only sound to be heard is that of someone snoring on the couch.

Posted by SharonOddieBrown at 11:24 AM