When Andreas & I moved to Roberts Creek about a decade ago, we attended our first New Years Day celebration at the pier, a time when dozens of small, home-made boats were launched into the ocean at dusk. As the boats sailed out into the dark, many people also launched their silent wishes for the New Year. Others chose to ignore their inner pagan, and simply launched a boat. Most of the boats were cobbled together out of left-over bits of wood, the season’s haul of wine corks, paper bags and whatever was at hand. Some of them were a little more extravagant. One of them even had a highway flare installed near its stern.

The back story about that particular flare says a lot about our little community. Apparently, just before Christmas that year, a van full of kids, driven by a volunteer parent on their way back from some school event on the mainland, had been stopped by the RCMP on account of a malfunctioning rear light. While the uniformed officer was delivering his homily on safety, and writing up a ticket for the requisite fine, another parent decided to right the balance of what he perceived to be evident injustice, and helped himself to a fistful of the safety flares cached in the open trunk of the cruiser. Now, it isn’t that we condone such behaviour in Roberts Creek, but we do appreciate it from time to time.

It also helps to understand our community if you also know that we consider ourselves to be a nation: The Gumboot Nation. The article in Wikipedia does not mention this, but we also have a King and a Queen as well as a flag, which is trotted out annually for The Piggley Wiggley Parade in the summer. Heck, we even have a national flower: the skunk cabbage.

Years ago, when a gas company was running a gas line through Roberts Creek to take gas to Vancouver Island, they made a monumental miscalculation, and refused to install the necessary lines to also deliver gas to Roberts Creek. The Creekers did what came naturally to them. They organized a protest, hauled enough chesterfields up to block the highway, and then sat in them until the gas company relented.

Not too long ago, at one of our New Year launches, the use of one of the original illicit flares triggered a call-out to the Coast Guard. Since we take such things seriously, that was the last year for the flares. Mind you, it didn’t stop my husband, who this year installed a firework on his boat, and when it ignited a hundred yards out in the mouth of the creek, it cascaded a shower of stars.

The whole scene, as you can see beneath was jaw-droppingly gorgeous. Not that I was able to catch a snap of the fireworks. My husband’s boat is the little speck of flame on sunset-red water. Since a picture is worth a thousand words, I think I’ll just call this blog done. 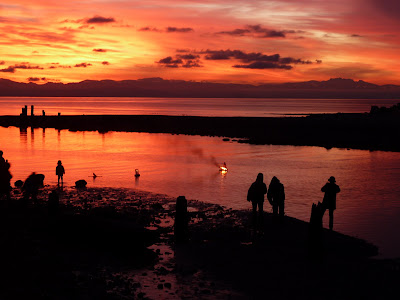 Posted by SharonOddieBrown at 6:36 PM