Brick walls aren’t there to keep you out.
They’re there to see how badly you want it.
Lyra McKee quoted in The Guardian 28 April 2019.

When I first read that Dr. Richard Jackson, the brother of Rev. William Jackson (1737-1795), had served as vicar-general to the late Archbishop of Cashel, I had assumed that the term vicar-general meant that I should be looking for a man of the cloth. After spending close to half a day at the Representative Church Body Library, south of Dublin City, looking for an ordained minister named Richard Jackson in the right time frame, I concluded that there wasn’t one – but what to make of that?

As I bused back to my lodgings on the #14 bus, I felt like the character of Carrie Mathison in the TV series Homeland. Over and over again, she keeps asking herself: What am I missing?

Months later, the penny dropped. Richard Jackson was probably a Dr. of Law rather than a Rev. Dr.. Since he was the first-born son, and given that his father had a legal background, this made sense. Although Vicars-General retain important administrative and judicial functions within the church – they need not be ordained. When Dr. Richard was recorded in the Dublin Registers, the acronym J.U.D. was tacked on after his name. This indicated that he held a doctorate in both church and civil law. From 1761 until his death in 1769 he continued to be listed as one of the officers in the Consistory Court: Metropolitan Court of Cashel, Vicar-General Richard Jackson, J.U.D., Dublin.

Fortunately, there is a record of his time spent as a student at Trinity which gives us a few more leads. The acronym beside his name of S.C. or Socius Comitatus means that he was one of the students who paid double fees and enjoyed certain privileges, including being allowed to complete the course in three years instead of four. Then as now, money talks. These students were seen as the elite of the college and most of them would have seen themselves that way as well.
Three new facts arise from this entry:
After finding this, I was now convinced that I would be able to find the next clues in the Registry of Deeds – and solve all this (albeit in my usual bumbling way).  I started with Ballycastle, and then shunted over to Dublin. The whole exercise made me feel like a female version of Inspector Clouseau. 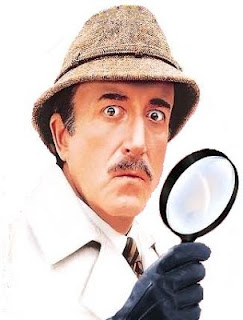 Unfortunately, after a day of searching the townland index, I could find no Jacksons connected to Ballycastle. None. Not about to give up, because other work that I had done had turned up scads of them in Newtownards, I then turned to Bethams Abstracts.

Sir William Betham (1779-1853) would have known of Rev. William Jackson, even though he was only 16 years old at the time of Jackson's trial. About a decade after Jackson's death, Betham was appointed deputy Ulster King of Arms and later was promoted to head. While serving in these roles, he doggedly created indexes and abstracts of many thousands of the manuscripts held in the Record Tower of Dublin Castle. His focus was on the landed gentry, although thankfully he also hoovered up other records along the way. This was a vital service to future historians since so much Irish history had subsequently been lost in the fire of 1922. Included in one of his notes, was an abstract of Richard Jackson’ jr.'s will:


Obviously, Richard jr. died sometime between writing his will in November 1768 and the date when it was proved in April 17, 1769. The will itself was destroyed in the 1922 fire but this does not mean  another brick wall - merely another approach. Time to revisit the records held in the Memorials of Deeds on Henrietta Street. These memorials of leases and such are indexed by lessor (aka the owner), and not by the lessee (aka the renter). Since I did not know whether Richard jr. was an owner or a renter, I could not be sure what I might find. As it turned out, I hit paydirt.

In my previous post: Rev. William JACKSON - Dead Ends, I mentioned  an aunt on Rev. William's mother’s side who was married to Dr. Sall who was described as many years register to the archiepiscopal court of Dublin. The paydirt was a reference in the Deeds Registry Names Index under Katherin SALE - executor for Dr. Richard Jackson. May 10, 1769. The ink was barely dry on the probate when this was registered.

What have we learned? Both in this abstract and in the Betham's record, there is no mention that Richard Jackson had a living wife or children. Since Betham's abstracts usually included the names of beneficiaries I suspect that he was unwed, as they say: sans issue.

The new questions raised by this abstract are:
It may be that there is no connection between Thomas, James or Dr. Richard Jackson, but two things leap out at me: firstly, the proximity of these three holdings and secondly the mention of 3 full undivided fourth parts of said dwelling house in Cuff Street. Is it possible that Thomas Jackson the Glass seller could be a brother of Rev William and Richard Jackson? That will take more work to suss out, although it is worth bearing in mind.

As for the outstanding question of who was Katherine Sale?, that is where I will kick off the next post. Records of her land transactions have provided the clue which was key to determining the forename of the mother of both Richard and Rev. William Jackson. And along the way, there was one surprising twist. Stay tuned.
Posted by SharonOddieBrown at 10:55 AM