A Riff on Three Books 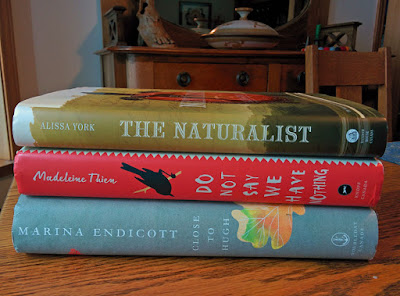 Last August, when Marina Endicott, Madeleine Thien, and Alissa York were at the Sunshine Coast Festival of the Written Arts, they not only read from their own novels, but also attended most of the readings given by other writers. Often, as they took their seats in the audience, I couldn't help but notice their shared playfulness and vitality. I hope they will forgive me, but it made me think of a song:

The Mikado. First performed in 1885

A book review is a bit like a selfie of the reader and writer, two heads tilted towards each other, touching but separate. Every reader, including myself, transforms the book by the way they read it. These days, my reading is shaped by my obsessive curiosity about inter-generational echoes. How much of each of us is mutable, and how much is not? And going in a different direction, how much of us is universal? After all, Joseph Campbell’s and Carl Jung’s notions of the collective unconscious are getting a second look thanks to the latest research in epigenetics.

In Do Not Say We Have Nothing, one of Madeleine Thien's characters, a mathematician, notes how much our experiences of time, and space and heredity are shaped both by our language and our culture:

In English, consciousness and unconsciousness are part of a vertical plane, so that we wake up ↑ and we fall ↓ asleep and we sink ↓ into a coma. Chinese uses the horizontal line, so that to wake is to cross a border towards consciousness → and to faint is to go back ←. Meanwhile, time itself is vertical, so that last year is “the year above” ↑ and next year is “the year below” ↓. The day before yesterday [前天] is the day “in front” ↑ and the day after tomorrow [後天] is the day behind ↓. This means that future generations are not the generations ahead, but the ones behind [*]. Therefore, to look into the future, one must turn around, a mirroring echo of Walter Benjamin’s famous evocation of the angel of history, “The storm irresistibly propels him into the future to which his back is turned, while the pile of debris before him grows skyward”. How we map time how it becomes lived and three-dimensional to us, how time is bent and elastic and repeated, has informed all my research, proofs and equations.
* I could not find a digital equivalent of the symbol Thien used here.

Her novel includes a story-within-a-story, in this case, a book called The Book of Records. It is a manuscript which has been copied by several generations, over and over again, and then left by the copyists in places where it can be found by those people who need to inherit it. Like DNA, the slight mutations in the copying live on. The lineage of each previous version is contained in the next, and these changes give us clues about who the previous copyists were, and where they might be found.

In the book above, Siddhartha Mukherjee posits that there were three very different, but profoundly destabilizing scientific ideas which shaped the 20th century. They included: the atom, the byte and the gene. As he notes:

Each is foreshadowed by an earlier century, but dazzles into full prominence in the 20th. Each begins its life as a rather abstract scientific concept, but grows to invade multiple human discourses thereby transforming culture, society, politics, and language. But the most crucial parallel between the three ideas, by far, is conceptual: each represents the irreducible unit – the building block, the basic organizational unit – of a larger whole: the atom, of matter; the byte (or bit) of digitized information; the gene, of heredity and biological information.

An example of this 19th century foreshadowing is played out in The Naturalist. The two trips that Alissa York’s characters took down the Amazon’s Rio Negro bracketed, both intellectually and chronologically, the 1859 publication of Charles Darwin’s The Origin of Species. This was a time when naturalists were still mucking about in the inter-tidal zone at the intersection of theology and biology. As they sailed down the Rio Negro, encountering all sorts of turtles, snakes, birds, and insects, several of them wondered – each in their own way - how much shape-shifting between species was possible. What about evolution? Why was the anaconda so big? Was it the same kind of snake that had tempted us in Paradise? Are we the anaconda?

One of the characters, Paul Ashe, was born to an American naturalist and his first wife, a member of one of the native families whose houses were scattered along the shores of the Rio Negro. This meant that he was genetically both a white American and an Amazonian native. After his mother died, as a result of giving birth to him, he lived with her extended family until he and his father left. Culturally, he was then raised as an American. And yet? Like the characters in Thien's book seeking out The Book of Records, Paul constantly rereads the diaries that his father had written during the 1844 trip. In doing so, something that he had resisted knowing finally dawns on him. He is as much connected to his mother’s family as to his father’s. When he comes to a passage, written by his father twenty-three years earlier, he reflects on what it might mean: In light of her condition, all but Zuleica herself had judged it wise that she remain at home.

Her condition – which is to say, Paul. He lifts his gaze from the small circle of lamplight. That’s him in there, breathing his mother’s blood, helplessly holding her back. You can see her standing on the dark, watching the Santa Carolina round the headland out of sight. Her sister is already climbing the bank, but Zuleica lingers, hands on her belly, eyes on the last grey billow of the galliota’s sail.

As Paul has to rest while he heals from an injury to his foot, even more questions begin to surface, questions that only his mother’s sister can answer. How did he survive the death of his mother? How was he fed as an infant? The answers to these questions reveal that he also belongs to her more than he could have imagined, and could not have survived without her.

And like Paul, Hugh, the central character in Endicott’s novel, Close to Hugh, was also a grown man who had an absent mother. Unlike Paul's, Hugh's mother had not died in childbirth, but she had been away for long periods of time thanks to frequent bouts of mental illness. Ruth, a neighbour who took in foster children, some of whom remained his life-long friends, became Hugh's second mother.

The first time he was sent to live with her, four years old, confused, he thought they said to call her Aunt Truth. Newell, waiting with him, waiting for their mothers to come back: two boys side by side at the long white table, watching Ruth laugh as she stood stirring at the stove, laughing at something Jasper said. Jasper flirting in his peacock shirt, gesturing with his glass – he didn’t even drink too much, back then. When was that? 1969. Warm and safe in Ruth’s foster-kitchen, those boys, backs against fake ivy-covered bricks on washed clean vinyl wallpaper. Ivy in pots too, growing, growing, shining green, kind and clean.

The generational tribes in Endicott’s fictionalized southern Ontario town are just as much shaped by the impact of the byte, as they are by the reality of the gene. Endicott explores the ways in which social media, email, and twitter messages can fray our shared social fabric, but also knit it back together. Her book's structure echoes the fragmentation and discontinuity of our digital world. As Karl Marx says: History repeats itself, first as tragedy, second as farce. In this farce-like life, her characters are caught up in a perverse game of snakes and ladders. Up and Down. Forward and Back. Of course, word-play being what it is in this novel, Hugh is saved by Ivy – the woman not the wallpaper. But it couldn’t have happened had Hugh not first fallen down a ladder, and then scaled a ladder, and then finally risked love long after he had long thought – not without reason -  that it had passed him by.

We are living in an age when the question of how individual heredity shapes cultures, politics, science and art, as well as individual lives, are being explored at new depths by scientists. There will be consequences to what they find. Our beliefs about ourselves, which we now know are inherited through a mix of both nature and nurture, do have the power to change how we view our own lives and the lives of others, and also how we judge ourselves and others and how we interpret our personal and national stories. And because our personal experiences and beliefs can leave epigenetic markers on our individual DNA, the effects of them, like the effects of these three books, have the potential to influence the futures of generations to come.

Posted by SharonOddieBrown at 10:53 AM