There is not a lot of choice when it comes to finding a place to stay in Kilcullen, so I was thankful that I was given a recommendation. That being said, I did approach my time there with some apprehension. After all, Bardons is not only a Guest House, but also a pub, and I have had some past experiences of staying above pubs.  Just let’s say that ear plugs don’t usually cut it.

I need not have worried, not in the least. Bardon’s is not that kind of pub, and Kilcullen, it seems, is not that kind of village. The voices that did drift up from the street late at night were all happy ones, and their conversations brief. No wonder. Bardons seems to function like an extended living room, a homey place for families and friends who come to watch the rugby together, or to tuck into a good feed for Mothers Day. On both of the days that I was there, it was fully booked with reservation signs on virtually every table. The locals know what’s good, and make sure they get their oar in. 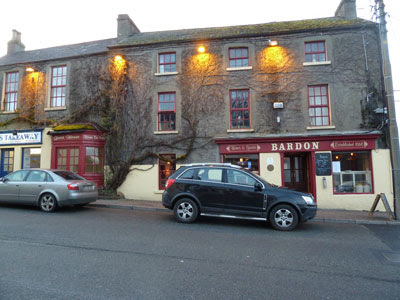 The entire time that I stayed there, the bar manager Eddie went out of his way to make me feel at home. The room itself was spacious and comfortable. It was modestly appointed, but the fee was modest, and hence represented good value. I did miss the fact that there was no kettle, especially since the town is small enough that a decent coffee cannot be reliably rustled up in the wee hours of the morning. Eddie did his best to see if he could find one for me, and I definitely appreciated the effort. He let me into the pub early in each day so I could get hot water for my travelling Bodum press. In the end, I was a very happy camper. 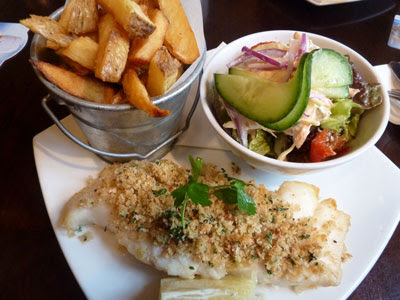 On my last day in Kilcullen, I treated myself to lunch at the pub. It turned out to be the best fish I have ever had in Ireland – and that is saying something. After all, this wasn’t my first foray into consuming Irish fish. It is one of my fave raves. Part of what made it exceptional was that the fish and chips had not been made ahead of time and kept in a warming oven. The salad included tomatoes that had been slightly baked to concentrate the flavours, and kicked up a notch with a touch of balsamic. Everything was freshly prepared. For me.

Even better, Eddie refused payment for this lunch. Repeatedly refused - and believe me, I tried. It mattered to him that there had been a wee plumbing problem which had not been a big deal for me, but he wanted me to feel fully cared for. And so, I was, much more than anyone should reasonably expect.

So, that was my Mother’s Day in Ireland. Not too shabby.

Posted by SharonOddieBrown at 1:50 PM