Gratitude is a salad.

Today is American Thanksgiving, a month or so later than the Canadian version. I actually like the way that the two are on separate dates. Today, I am really enjoying celebrating my gratitude for my American friends and family. Our son-in-law, Micah, and his family always come to mind on this day, as well as they do on many other days. They don’t make people any better than this. Actually this year, in some ways, I celebrated American Thanksgiving early. 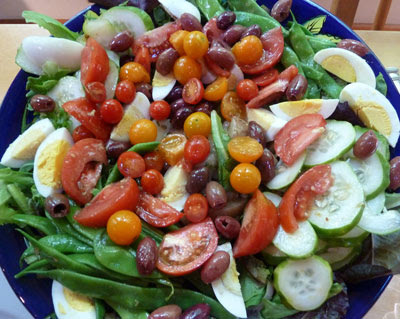 On September 18th I visited Micah’s parents, Trudy & Joel, in their home outside New Salem. In the clearing in the woods, that surrounds their home, they have a half dozen or so raised beds where they grow much of what they eat during the growing season. The salad in the picture above was one that Trudy made from the mix of vegetables that she and Joel had grown. She also baked bread for us, and made an amazing cake. In fact, the lunch spread was more than generous, more than beautiful, and more than delicious. Some of the left-over bagel, salmon and cream cheese fueled me the following evening when I flew off to Ireland.
Food such as this is a blessing. Grown with love; prepared with love; served with love. There are reasons that food features in the sacramental rituals of so many faiths.
Yesterday, Andreas set out crab traps and thankfully the crabs obliged. Our plan was to score enough to be able to make crab cakes with whiskey sauce with Sabrina and Micah when they visit here over the Christmas break. They will be here in a matter of weeks. Now, there is a pound or more of shelled crab in the freezer awaiting their arrival.
When I visited them recently in Boston, Micah made my coffee for me every morning, a perfect Americano served in a Crown Derby cup. After coffee, and brunch on the deck - made by Sabrina – she and I often walked, and talked, and listened for hours. It was my first real chance to get to know a bit about their neighbourhood. Some evenings, we went out to local restaurants that I have been meaning to write about - there are so many places in Boston with such amazing food for easy-on-the-wallet prices. One day, the two of them tried to see if they could get me into a clothing store and have me walk out with something that I would wear. They even succeeded. That is harder than many people might think.
Oh my, oh my. Profound gratitude. Thanks-giving.
Today in Roberts Creek, we are in the midst of an early winter storm with the surf loosening the snags that have been dug in to the sand for some years at the edge of the shore. There will be no crabbing today, but the pounding of the surf has been booming like fat chords played on a pipe organ. The biggest snag that had been at the bottom of our stairs for the past few years was moved west by one of the larger surges. Perhaps over Christmas, when we have more hands on deck, we can chainsaw up the rest of it, and open up a new passage for easier egress for all the friends who join us for Twelfth Night.
Gratitude in so many forms. I could go on forever, but it is time to baste the Chinese Honey-Ginger Duck that I am cooking for tonight's dinner with Vietnamese black rice. For American Thanksgiving. In Canada.
Posted by SharonOddieBrown at 4:29 PM