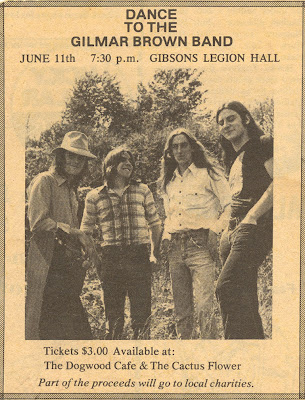 Nobody does Rolling Stones covers like my brothers. They play them full of edge, and piss and vinegar, and whatever else needs to be added to the mix to make them soar. They also play covers of tons of other musician’s tunes, as well as a fist-full of songs they have written themselves. I don’t know what kind of mix the three of them will be playing tonight at the Gibsons Legion, but I can guarantee you, the place will be packed, people will be up on their feet dancing, and the bartender will have to hop-to in order to keep up with it all.
Thirty five years have zipped past us since the two youngest Brown brothers first started playing together in a band in Gibsons. The girls went wild, and the boys were all envious. For a while, they toured through the Western provinces, but after several stints of this, real life intervened. Once parenthood entered the picture - well, real jobs had to begin. Not that this means that the boys have ever quit dishing out the music.
On Struan's 50th birthday in 2004, the Brown Brothers played at the old Pen Hotel up on Highway 101 - days before it actually burned down. They also played at the venerable Wakefield Inn before it was leveled. Upscale housing has since been built on the land where the Wakefield had been the watering hole of legend for decades. Much has changed.
The last time I heard my brothers play was a few months ago - April 30th:


Of course, as the older sister, by about a decade, I remember the the three yet-to-be musicians way back when:
Too much fun.
Posted by SharonOddieBrown at 3:06 PM