The Staff of Life

My father baked bread, his father baked bread, and at least one of my brothers joins me in carrying on this tradition. Perhaps my family’s bread baking habits go back even further than this. That, I don't know. I do know that my grandfather used to bake bread after being away for weeks on the CPR railway lines in the early 1900s in Western Canada. Back then, he worked as an engineer figuring out ways to repair the tracks that had sunk into soft earth after winter frosts, or how to replace the wooden bridges whose trestles had burn to the ground. When he came home from being away in the field, he baked to relax. 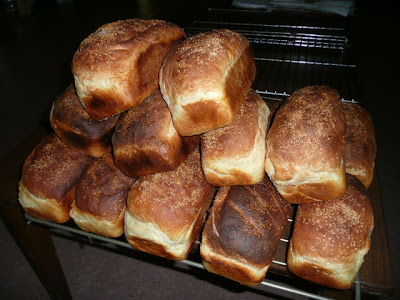 The loaves in the picture above were ones that I baked as part of the food for the wedding of my eldest daughter Sabrina, and her husband Micah, in New Salem, Massachusetts. It was one year ago today. As part of the festivities, the two of them created a menu plan that included foods they had enjoyed when they were growing up, as well as foods that the two of them had cooked together.
My daughters used to help me make baby bum bread. The name may sound weird, but that was part of the fun of it. It came from the texture the dough needed to have when it was ready to put into loaf pans. The girls would pat the bread, and if enough flour had been kneaded into the dough so that it gave slightly, but didn’t lose its shape, then it was time for the girlish squeals of: baby bum!
Before I had children, I worked as a camp director for the YWCA at Camp YaWaCa on Saltspring Island, where amongst other pleasures, I also taught bread-making to all the campers. We had a routine where each cabin of eight girls would bake enough for the entire camp for the next two days. We had a microscope so the kids could watch yeast cells dividing. I mostly taught them the basics, my bibles in those days being The Tassajara Bread Book by Edward Espe Brown, and The New York Times Natural Foods Cookbook by Jean Hewitt. Both books have served me well over the past four decades.
The campers were given pretty free rein. Once they had grasped the order that ingredients went into the bread, and the importance of beating the sponge to get the gluten strands to become elastic, then the choice of ingredients was theirs. White flour, whole wheat, other grains, nuts, dried fruits – you name it. Not that the camp cook probably ever forgave me for the time that the youngest cabin was let loose on bread baking detail. I can assure you that cooking French toast on a griddle for one hundred and twenty people with chocolate chip bread can be a titch aggravating, although it did add a certain je ne sais quoi to tuna fish sandwiches that were served later for lunch.
After my children were born, I usually made bread with a mixture of vegetable water from the previous night’s veggie cooking, eggs, cottage cheese, and white flour. The white flour choice was mostly because my husband was more of a white flour kind of guy – although he has recently been enjoying half and half . The loaves I baked back then were usually in the conventional loaf shape, and looked like the ones above, although for a while, I cooked bread in upright coffee tins.
This bread would rise to the top of the cylindrical tins, and then the tops would slightly overflow and tip sideways. For the obvious visual reasons, it became known as penis bread. In 1980 or 1981, I forget, I took a half dozen such loaves in a balsa wood peach basket to a dinner party at the home of sculptor Joe Fafard. It intrigued him how bread could be made to slump over the side of the balsa wood basket. I later revealed my secrets. At the time, he was creating large ceramic sculptures, and we all trooped out to his studio to see Margaret Atwood in his kiln, waiting to be fired.
Now there are only the two of us at home, I have adapted my bread-making habits. Often I grind hard wheat to make a half white, half brown loaf – roughly following the directions in the New York Times Bread recipe.  Recently, thanks to my brother Struan, I have added a new trick. Again, I roughly follow the NYT method, but I use a smaller amount of water, and then after an hour’s worth of rising time, I add salt, a wee titch of sugar, some flax, a handful of pumpkin seeds, whatever else strikes my fancy, but most importantly, I also add chia seeds which have soaked for the past hour in warm water. The bread then ends up having that glutinous chew that I really like, and also keeps pretty fresh for the next few days, until we can get through the whole loaf.
Today, I have baked a loaf to celebrate a convergence of weddings. Micah’s and Sabrina’s, naturally. Also, some of the food I am making today will be from the same recipes that Sabrina used when she cooked for Andreas and me at our wedding, when we finally got married after some three decades of living together.  Recently, there was a third marriage – the wedding of our friends Per & Kristjana was celebrated up here on the Coast a few months ago. They will be joining us tonight. I think the cocktail that I will serve should be Head Over Heels  - one of my faves for such occasions. Life is good. 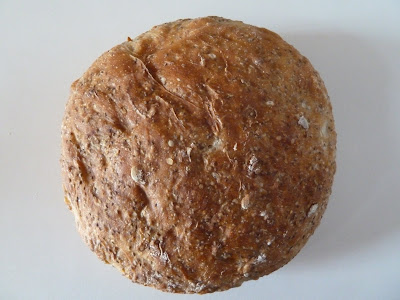 Posted by SharonOddieBrown at 4:20 PM