Years ago, when I was on a holiday in Ashland, Oregon and enjoying a couple of weeks of amazing theatre, I picked up a copy of Singapore Days of Old. It is a commemorative history published by the Singapore Tattler. As you might guess, it is a chatty romp through aspects of the history of Singapore, with lots of photos. The one above stayed with me, and I was curious to learn more. I already knew that the driver of the car would likely be the sister-in-law of Sir Thomas Jackson, but I knew nothing more about her.
After a bit of digging, I found out that she was born Annie Dorothea Caroline EARNSHAW of Knaresborough, Yorkshire, England. The story of her life sheds light on several aspects of the lives of the both the Dare and Jackson families, whose members rose to such prominence in the Far East in the 1800s. Her first husband was George Mildmay Dare, brother to Amelia Lydia Dare, the wife of Sir Thomas Jackson. Not surprisingly, it was the women who actively created the social connections which started the friendships, which in turn lead to ongoing business connections. More of these kinds of stories will be told in my upcoming book.
In the meantime, the car in the photo above was Annie’s first car, a 12hp, two cylinder Star. The man seated beside her is George Mildmay Dare. Although the photograph is undated, it would be between 1902 when the 10hp twin cylinder model of the Star was first produced, and December 1907, when George succumbed to heart disease. Already by 1902, he was limited from undertaking anything very strenuous. This is worth keeping in mind when considering what this meant for Annie’s life as a female driver in the early 1900s.
Bear in mind that there were no motor garages or other such infrastructure at this time. Drivers had to be something of a dab hand at roadside repairs, and also be able to undertake oiling, adjustments and possibly even a change of tire. You would think -  given that Annie had a semi-invalid husband - that she would have driven conservatively, and have been the owner of a car described as: Car for sale by old lady, used only to go to church.  In fact, she drove this car more than 69,400 miles all over Singapore, the Malay Peninsula, Java, England, and Scotland. She called it Ichiban, a Japanese word for Number One, echoing the licence plate number S.1.,  visible in the photo. Singaporean natives, when they saw her tearing past, had another name for it: The Devil Wind Carriage.
Eventually, she took this car back to England in 1908, to have it kitted out with a detachable back so it could be used as either a two or four-seater. Before she did this, she taught Hassan bin Mohamed how to drive. As a result, he earned the distinction of being the first Malay chauffeur to obtain his driving licence. I do not know if he is the man standing beside the car. It is the kind of thing that I wish I did know. It is also the kind of instance where cultural biases often lead to names that are not us getting left out of the picture.
Annie was also well known not only as a driver of the Devil Wind Carriage, but also for her musical and theatrical talents. In the late 1880s, she sang and acted in both the musical Iolanthe, as well as the comic opera Crimson Scarf with Sir Thomas de Multon Lee Braddell. He just happened to be the Attorney-General of the Straits Settlements and Chief Judicial Commissioner of the Federated Malay States, as stage manager.  This is how the social circles worked. In amateur productions then as now, the enthusiasts wore many hats. Annie was also singled out for her taste and skill in designing dresses, and her unflagging enthusiasm, much of the success was due, added to which her charming appearance and voice helped greatly in the work on the stage.
In 1893, she performed in The Mikado, by Gilbert and Sullivan. From the vantage point of the twenty-first century, it seems strange to be performing that particular play in Singapore, but I suspect that was the least of many incongruities of the time. Three years later in 1896, she performed in The Grand Duke in the role of Princess of Monte Carlo, while her future second husband, G.P. Owen performed the role of the Prince of Monte Carlo. I have no idea if Owen was also married at the time.

Annie’s first husband, George Mildmay Dare, was also an amateur actor, known often under his stage name of Miss Julia Brani -  Brani  being Malay for Dare, the name that he used when he took on female roles. He had joined the Corps Dramatique, just after he returned to Singapore at age seventeen. It was a troop of actors made up of young men in business, and his role was that of Lucy in the farce John Dobbs:
It was a difficult part, but they say I performed it to everyone’s satisfaction, and made what they called “a stunning girl”! I went in a crinoline made out of rattan, and even after the theatre was not known till I commenced kicking the syce’s back on account of his not opening the door wide enough, which elicited a roar of laughter from the men in the portico of the theatre, who were all seeing four young ladies into their carriage. We all had a capital dance after the performance on the stage, in our theatrical costumes, and a good champagne supper afterwards, from which we got home at two in the morning.
Regrettably, I have no photos of his performances. As well as his activities as Miss Julia Brani, he was also renowned for his prowess with hunting, sailing, cricket, horse-racing and polo, an all round kind of guy. He was also a successful broker in Yokohama with considerable business interests in the exporting of silk. He started business there about the time that the port of Yokohama was just opening up, and rode the uptick in sales when the French silkworms at Lyons succumbed to a virus, and the French had to import 85% of their silk from China.
NOTE: The main source for much of the material in this blog comes from One Hundred Years of Singapore Vol II 1921. Also, I have transcribed and annotated published obits for George Mildmay Dare, and Annie Owen on my web site. They are quite lengthy descriptions, not the usual kind of obit that simply states who died and when.
In an odd bit of serendipity, I also have a photo of my father when he was in his mid-forties in the role of Poo-Bah in a production of  The Mikado  staged in 1962 on the 1st Air Division Canadian Air Force Base at Metz France. Flight Lt. David Hugh Plunkett Brown is on the extreme right in the picture beneath. I suspect the other two men are Thomas Large in the role of Ko-Ko and Lauchlan MacQuarrie in the role of Pish-Tush. 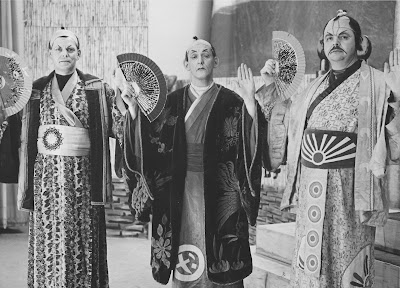 Posted by SharonOddieBrown at 2:55 PM