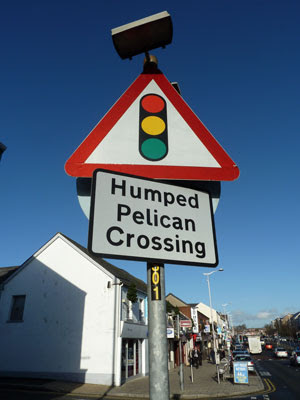 NOTE: For reasons mysterious to me, this post shows up under August 2011 - when I actually posted it in November 2010. I did finally add the picture to the text in August 2011, which may be the explanation.

I took this picture in Banbridge the other day, just across from the bus station at the War Memorial stop. Naturally, I had to quiz my Irish hosts about the meaning and etymology of - Humped Pelican Crossing. No such traffic animal exists in Canada. We all took the quest quite seriously, and the consequent search naturally took us deep into Google territory which finally revealed that in the UK - which includes Northern Ireland - there are at least three kinds of related crossings: Zebra, Pelican and Puffin. Who knew?


During the after-supper analysis with my Gilford Castle hosts, we ruminated on what these different designations might mean and more importantly - how did such names get chosen for this kind of traffic sign. Well, the zebra is striped ... yes ... and the pelican has a bill ...

I don't think I can blame the Irish whiskey - it is a challenging topic on which to make much progress, and so it is with great regret that I must leave you with much of the mystery still intact. If you really need to know more from the official oracles of signage, there is always the Ten Commandments of Traffic as revealed by the Department for Transport, at Great Minister House, London.


It does make me wonder though if Canada should follow the lead of our mother country and introduce signs such as: Humped Bison Crossing and Humped Grizzly Crossing. After all, each of these animals actually come equipped with humps. No mystery there. Also, if we had such signs, then tourists to Canada would take wads of photos, and they too would end up in inane blog posts such as this.

Posted by SharonOddieBrown at 10:49 AM