On Saturday last, thanks to the driving savvy and instincts of Christine Wright, I found what I was seeking in the townland of Aghavilla, in the parish of Carrigallen, Co. Leitrim - the birthplace of Sir Thomas Jackson (1841-1914). The first Jackson connection to the land - at least the first that I know about - was revealed in the 1838 marriage settlement of Thomas Jackson’s parents: David Jackson (1814-1889) & Eliza OLIVER (1815-1903):

… the said David Jackson is now legally possessed of and entitled unto all that and those that part of the lands of Aughavilla  with the houses and appurtenances thereunto belonging situate in the County of Leitrim aforesaid, and containing eighty-six acres, and seventeen perches or thereabouts, late Irish plantation measure, all which lands are lying and being in the Parish of Carrigallen, and barony of Carrigallen in said County - To hold to the said David Jackson his Heirs and Assigns for ever at the yearly rent  of one guinea per acre…

From the description, this seems to have been a lease in perpetuity. The surveyor’s notebooks in the Valuation Office Field Books of 1841, describe the holding in ways that make it seem to be marginal – at least when it comes to profitable farming:

It wasn’t until I felt how squishy the land was underfoot, that I fully grasped the implications of good rushy pasture.  Good for not much, it would seem. There is no way that such land could support cattle or horses grazing throughout much of the year. Goats and sheep would be the largest animals that fields like these could support.

The townland of Aghavilla has more trees than it did in the mid-1800s, but many of the newly planted groves are struggling. The trees are spindly, and covered in moss and lichen. On the plus side, the quick darting of the Goldcrest Warblers, Ireland’s smallest bird, add vibrancy to the landscape, as does the thicket of sound that they create. If you look down at your feet, there is a wonderland of colour. Primroses and wild garlic flower along the road side, and trout are in abundance in the nearby lakes.

Had it not been for a mix of maps, both current road maps as well as land-holding maps from Griffiths,  we would never have found the townland at all. Truth be told, it also required  directions from a stranger who came out of her house wondering what we were up to. Beneath is the 1857 map:

The section of Aghavilla that the Jacksons leased most likely included 10a. The layout is useful when compared to both today’s Google Earth, and what we found on the ground. Drawings, from the 1857 maps, are not always 100% accurate, but they are a good start.
INSERT detail of 10a.
As for value of the buildings which can be seen on the map, another surveyor’s notebook from a few months after the first one included a description of the house and buildings: 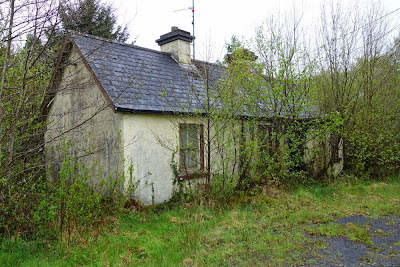 This house pictured above has roughly the same dimensions to the house that was described in 1841, and is in about the same location. That being said, it would take someone (who is more expert than I will ever be) to make the judgement call that this was David Jackson’s in 1841. Also, there might not have been two chimneys in the original house, nor – of course - would there have been a TV aerial.

Thanks to the visitation books of the Carrigallen Presbyterian Church, we know that the Jacksons lived at Aghavilla, at least between 1838 and 1846. Rev. John Fisher recorded one Jackson communicant in the household - presumably Eliza. Her husband’s name was not noted, but we know that he was affiliated with the Church of Ireland, and also had little interest in churches of any stripe. It was always Eliza, not David, who prevailed when it came to the spiritual welfare of their children. Four of them were listed in the visitation book:

John Born
Thos born NOTE: This is the future Sir Thomas Jackson
Mary born 1844 NOTE her older sister Elizabeth b. 1843 was not included in this list.
Andrew Coulter Bradford April 5, 1846

Even though the family would have been regarded as middle class, the records reveal that they were on the bottom rung and slipping. The value of their Aghavilly land went from a value of £5.4 on January 1841, down to £4.18.0 a year later - a 23% drop in value. By 1856, in the post-famine era, the lease was held by a Hugh Rorke. The land was worth even less than it had been a decade earlier, and the Jacksons were now living at Urker in South Armagh. The last record that I have found of David Jackson in connection to Aghavilla is a land drainage document dated September 29, 1848:
SCHEDULE REFERRED TO IN THE FOREGOING AWARD, AND FORMING PART OF THE SAME.

So, what to make of all this? As a result of seeing the actual land, as opposed to simply reading about it in legal documents, my assumptions about what kind of farming the Jacksons had engaged in have changed. Even though the taller of the two out-buildings suggested a use as a cattle or horse barn, the land would have been unsuitable for grazing for a good part of the year. They probably used some of the smaller out-buildings for feed storage and for a few pigs, and there would also have been chicken coops, and possibly rabbit hutches. Modest structures such as these were never noted by the surveyors.

On the drive home, Christine and I kept coming back to the question of not only how and why the Jacksons ended up here, but also: Why did they stay as long as they did? Even today, the townland of Aghavilly is isolated and most neighbours are a good walking distance away. The road that leads up it would have been little more than a trail in the 1840s. Given the frequency of rain, and flooding, I imagine that horse-driven carts would often have been stuck in the muck. The land was so wet that the locals used to joke that land in Leitrim was sold by the gallon, not by the acre. The larger hollows became lakes; the smaller ones ended up as either puddles or rain-sodden fields.

In the London Underground, when the train slows to a stop, a voice cautions: Mind the gap. We would do well to do this here. The only other clue – and it is a slim one at that - is a deed from 1790 involving an Alexander Wilson late of Denroman [aka Dunraymond] in the Co. of Monaghan but then of Aughavilly. Wilson was a famer who had business dealings with Thomas McCullagh, one of Thomas Jackson’s great-uncles and a well-heeled farmer and linen trader in Co. Monaghan. The graveyard of the Church of Ireland cemetery in Carrigallen is thick with Wilsons. Are they the key to learning how Thomas Jackson came to be born here? It is not impossible that David Jackson may have inherited this land from Thomas McCullagh, land which had been previously deeded to Alexander Wilson. On the other hand: Mind the gap.
Posted by SharonOddieBrown at 1:59 AM