Years ago, when I was actually paid to solve problems, I often tossed up what I called clay pigeons as a way to focus thinking. It is not the only way, or even always the best way, but it can be effective. In one experiment about the value of having something to focus on, it was proven that men significantly improved their aim when a dead fly was placed in the urinals that they used. I am not making this up. Of course, if the clay pigeon, or dead fly, or whatever else you are choosing to focus on turns out to be a red herring, it does make sense to stop aiming at it. Especially if it is on the floor.

With respect to my work on who Sir Thomas Jackson might have thought his ancestors were, my clay pigeon is in the form of a shoveller -a duck – and it has proven to be remarkably effective, thanks to the fact that my own research has been complemented by the indefatigable efforts of Jan Waugh from Arizona. One day, I hope we meet.

After seeing the shovellers on Sir Thomas’ coat of arms, Jan and I started seeing shovellers in other Jackson coats of arms – veritable flocks of them. I suspect that most of this has to do with the dominance of the Mercers  and Clothworkers Guilds in bankrolling King and Queen, bailing out other hard up aristocrats, and yes, even contributing funds to the first settlement at Virginia in America.

It would help if there were written records about why these shovellers were included in Sir Thomas’ coat of arms, but unfortunately no such records exist. Peter O’Donaghue, York Herald at the College of Arms in London, was clear on this point. I have to say that I was thrilled to hear from him a couple of days ago. I had been trying for years to find out whether there were any records concerning the creation of Sir Thomas’ coats of arms, but had been clearly sending letters to the wrong in-box. Now that I know that there is nothing to be found, I can at least stop looking and hoping.

Paraphrasing the advice that I got from Mr. O’Donaghue, coats of arms are like jazz – they are best enjoyed as a riff.  Take them for what they are. For hundreds of years men would invent arms for themselves, even though they had not been granted the official use of them. Then, for those who did become baronets, and had already been usuing their own self-created arms, they tended to stick with the design that they had already been using for years. Others simply appropriated aspects of Arms that had been used by prestigious people who shared the same surname. It isn’t far off from the kind of heraldic Clip Art you find on mugs and plaques in tourist shops in Temple Bar in the heart of Dublin. There is usually little point in expecting this to be meaningful in terms of either blood-lines or family ties (not always the same thing – as we know from the frequency of the so-called non-paternal events). But sometimes there is a point.

For years, I took copious notes of any Jackson arms that had birds on them. Then I posted what I had found on a page on my web site. One of these memorials revealed the sad tale of a young mother, who had died at age twenty-four after having already buried two infant sons. Only her daughter Susanna, and her husband Richard survived her. Thanks to Anthony R. Yates of Leicester, I even have an image of her memorial to share. Some repainting of the memorial, which was done in more recent times, used colours for the Bates side of the crest which are incorrect, but the  colours used for the Jackson touch-up are probably close enough: 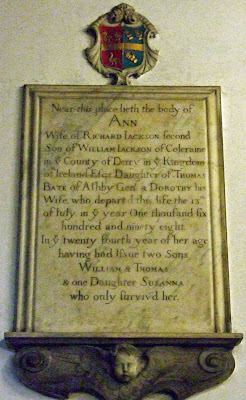 Near this place lieth the body of
ANN
Wife of Richard Jackson, second
Son of William of Coleraine
In ye County of Derry, in ye Kingdom
Of Ireland Esq. Daughter of Thomas
Bate of Ashby Gen. And Dorothy his
Wife, who departed this life the 13th
Of July, in ye year One thousand six
Hundred and ninety eight.
In ye twenty-fourth year of her age
Having had issue two sons
William and Thomas
& one daughter Susanna
Who only survived her.
Above are painted arms (gules, a fesse between three shovellers or; impaling Bate).

This is where my own ignorance – that following such birds was futile - led me to learning about Richard Jackson (1722-1787) of Forkhill. The Anne Bate who died at age twenty-four was the first wife of his father, Richard Jackson (1658-1730). Richard of Forkhill was the first-born son of his father’s second wife – Elizabeth Boyd, about whom I know nothing. Richard, who had bought the lands of Forkhill in 1742 when he had just come of age, died without issue. In his will, he created a trust to take care of the poor of his parish and to fund missionary work. He also made a donation to the Armagh Infirmary for the good of my poor fellow creatures who are destroyed by the advice of Quack Doctors. Unfortunately, his good intentions were undermined by legal nit-picking. It took an Act of Parliament and decades of litigation to sort it all out, but that’s a whole other story.

Meantime, there are the birds. Shovellers, to be precise. Richard of Forkhill had them in his family crest, and so did his father and grandfather. Had I not swallowed the notion that birds of a feather fly together, even in heraldic arms, I would never have even bothered to try to find the painting of Richard Jackson of Fork Hill aka Forkill. When I met up with the actual painting and its current custodian, I also found that Sir Thomas Jackson considered himself to be a kinsman of the Jacksons of Forkhill. A friend, Linda Leonard, will soon be checking out the pertinent correspondence at PRONI. If Thomas Jackson’s letters are there, I will definitely be doing the happy dance.

This is only the tip of the iceberg when it comes to what I have learned by bird watching. There will be more to come. The stories that connect the Jacksons with shovellers in their family crests stretch back and include Jackson family lines in Ireland, Yorkshire, Westmorland, London, and as you can see, even counties such as Leicestershire, places that you might not expect.
Posted by SharonOddieBrown at 11:58 AM