What I did on my Summer Vacation – Take Two.


This dragon lives, breathes and bakes pizza. Bread too. Working together over the past two months, my niece Jenny, and her friend Keetah envisioned, designed, and then actually built this amazing cob clay oven. You can see pictures of the evolution of it at Canadian Coastal Clayworks. They designed it so that the fire is in the belly of the dragon, and the smoke comes out through his nose.

My brother Struan told me that he had ordered every book he could find on cob building, but that Jennie and Keetah had taken the art form one step further than anything envisioned in all those books. The freestanding wings are fortified by a piece of rebar, bent into the shape of the wing. The benches on either side can support the full weight of a substantial adult. Struan’s contribution to the project, other than the rebar, was to feed the two of them as they worked. All of us should be so lucky. He is one helluva cook, and working with cob is one helluva of a lot of work, so good food was essential. 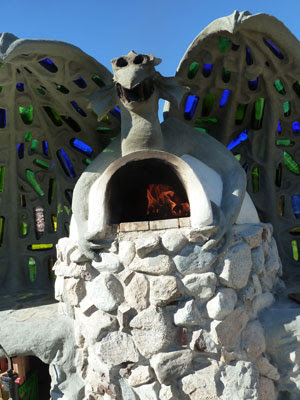 The dragon’s hands are cupping the belly of the flaming oven. Can we ask: Is this how indigestion looks – for a dragon? Note how the sun shines through the embedded wine bottles in the wings. My photos barely do it justice. 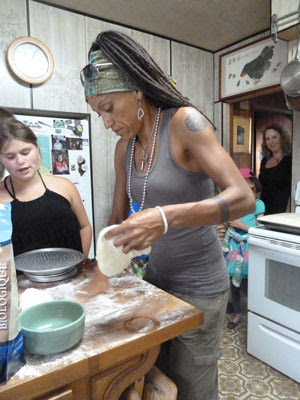 Back in the kitchen, Keetah & I were on duty making pizza skins. Our choice. The reason that she looks so serious is that neither of knew what we were doing – producing pizza skins in that kind of quantity. The dough kept springing back on us and retreating from the edges of the pizza pans. I thought that the two of us demonstrated how spiritually evolved we were by the fact that we weren’t cursing out loud. I mean, really.

Once the fire was ready, then the fully dressed pizza’s started going in, and coming out, going in and coming out – dozens and dozens of them. I missed getting pictures of the pizzas. After all, they had to eaten with two hands. Getting home-made sauce on the camera would have been dumb. It is hard to look classy when you are licking your camera.

One more thing. I am supposed to keep Kinga in my pocket when she can't be at such events, which means staying well into the night for all the musical jamming in the barn that usually accompanies parties at Sarah and Struan’s. I fell far short on my responsibilities, so sorry Kinga. Not only are there no pictures of the guys jamming in the barn with all sorts of instruments, but there are also no memories of it that I can share. Maybe next time. Me, I went home early, and for some unexplained reason seemed to be in need of ten hours of sleep.

Posted by SharonOddieBrown at 4:14 PM