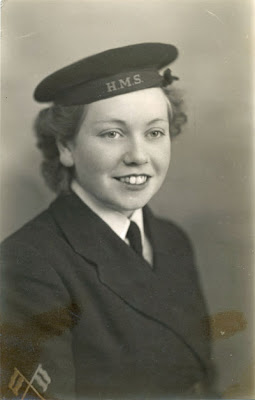 World War II was kind to my Aunt Pat, as it was to many women of her generation. This not to minimize the grief they felt for their friends and family killed in the conflict, but for her and for my mother it was like a get out of jail card. It was the key that freed them from the cage of a very small life, living with a long-widowed mother, with diminishing family resources, and the expectation that they were only to do what ladies do - which was not very much.
When Pat flew the coop, she flew as a Wren, all the way to Australia. Her eyes always lit up when she talked of those days. Finally, she could live out from under the surveillance of her mother. Because my mother moved to Canada as a war bride, we saw little of Aunt Pat in our growing up years. She had married Ted, a vet and the love of her life, and together they built a life in rural England of children, horses, dogs, and much walking - disguised as a game of golf.
Pat was the youngest child in her family, and grew up with four older brothers and my mother, six years older than her.  I’ll never forget when Pat came to visit us when my mother was dying. She had arrived on the afternoon of January 2nd, 1985, after missing all kinds of plane connections and hiking through the snow up our mountain. My mother was staying with us then, living out the last of her days suffering from the ravages of cancer, but her eyes came alive when she saw her sister. At the same time, Pat’s eyes filled with tears, and at a loss for words, she finally said, Betty, your hair has gone all white. My mother, responded with knee-jerk, sibling rivalry, Well, at least I have hair, - a taunt aimed at Pat’s recently thinned scalp. This catapulted both of them into laughter, the best medicine ever.
During the two weeks that she stayed with us, Pat gave us back the air that we so much needed to breathe. She sat with my mother, so we could leave to do simple errands, a luxury at that time. Buy groceries. Buy morphine. She also gave me parts of myself that I had never seen. I used to worry about you, she said, When we visited in Canada, you were always busy taking care of your brothers, helping prepare meals. You didn’t have a childhood. It was true, but for me it had been like water is to a fish. I had never noticed.
She told countless stories to the children, and also read to them, repeatedly from a book that she had just brought from England, Moses the Kitten, by James Herriot. It is the story of a kitten joining a litter of piglets to suckle and be warm. Vanessa would nestle into her side as she did. Hour after hour, Pat sang rhymes to Sabrina and Vanessa, rhymes that she herself had likely learned from my Grannie Oddie, her mother:
Creep mouse, creep mouse
This is how it goes
Pitter pat, pitter pat,
Over baby’s toes.
Isn’t he a tiny one,
Creep, creep, creep.
Sandman’s coming, baby darling,
Sleep, sleep, sleep.
Her hands danced in the air, the hands of the dancer which she had been in her youth, and Vanessa’s eyes would say, Do it again. Which Pat did, again, and again.
Will you tell the bees? My cousin Rose included this request when she told me about her mother’s death a few weeks ago, as she had also done when she told me a year and a half earlier about the death of her father,
There's an old country custom over here and, maybe in Canada too, that when a person dies another member of the family has to go down the garden and tell the bees in the beehive that their master or mistress is gone. Once the bees have been told, all will be well.
Since bees can’t read, I have one request on behalf of my dear Aunt Pat: please tell the bees.
Posted by SharonOddieBrown at 10:27 AM