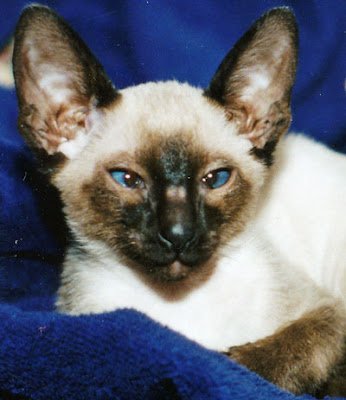 RIMSKY
A really good friend
OCT. 10, 1998 - Sept 8, 2011
Vanessa’s much loved cat, Rimsky, who had been ill for months, passed away peacefully in his sleep at her home in Roberts Creek.
Vanessa felt sad that he passed away when she was away at work, but she is also glad that he looked so peaceful in death. He was stretched out on the sofa, on a soft towel, under the window where he always enjoyed lying in the sun. He seemed to have passed away in his sleep.

He would have been thirteen years old on October 10th, which is a good old age for this breed of cat. It is amazing that he has lived this long. He was born with a range of health issues at birth, but Vanessa's love for him kept him alive longer than anyone might have thought possible. He was a gift to her, and she was a gift to him.

In the evening, we placed his body on a bed of cedar boughs in a wee coffin that Andreas had made specially for him, and placed beside him a rose from a plant that had come from Tante Gertraut's garden. Because he always loved to play fetch with drinking straws - he was amazing that way - Vanessa placed two straws in the box with him.
Yesterday, we interred him in Vanessa’s back yard in a private ceremony.
They come into our lives for such a short time
A time we wouldn’t trade not even for a dime
Then before you know it the years have flown by
And then all of the sudden we’re saying good-bye
From A Time to Remember by John Quealy
It will take Vanessa a while to get over this. As she said, and I am sure her fellow animal lovers will understand, "I have lost a friend".
Rimsky is survived by his brother, Kolya.
Posted by SharonOddieBrown at 4:01 PM