The Walls and Floors of Urker.


Peter Rogers, the current owner of the Jackson's ancestral home - Urker Lodge - toured me around the crumbling remains in the spring of 2014. I was curious about which parts of the remaining buildings would have been built pre-famine, and which parts would have been added to the original structures at some later date.

One of the sons, Thomas Jackson had left his home in South Armagh in 1864, at the age of 23, to make his fortune in China. He was successful enough that he was able to pay for renovations and additions at his parent's house in the late-1800s, a common tale for successful emigrant sons. Other buildings around the yard at Urker Lodge had been renovated and/or added on to during the middle of the 20th century when descendants of the Jacksons, the Wright family, had lived there.

Family letters and legal papers indicate that ever since the Jacksons arrived at the townlands of Liscalgat and Urker in the mid-1700s, their family fortunes had been quite volatile. At least once, if not twice, they had temporarily lost the farm, but then somehow had found the resources to build it back up again. Even though they once had their cattle seized by bailiffs for failure to pay rent, they also had been flush enough at one stage to be able to install cobblestone flooring. As the news clipping beneath reveals, when they seemingly lost the farm in 1829, after spending a sum of money on repairs, they also had a cache of port and sherry.

Peter Rogers knows a lot about old buildings. I only wish I had made more notes. People like him can tap a line of mortar with their index finger, and have an informed opinion about its date. I learned from him that Ordinary Portland Cement (or OPC) started to become more common in the 1930s in South Armagh, so that any wall which had been assembled using the old kind of lime mortar would probably have been built earlier than that. After the 1950s, the old mortars were rarely if ever used. Peter learned this from his father, who did construction during the pre and post war era.

From a range of articles available online, I also learned that the lime-kilns, such as the ones in South Armagh in the 19th century, were not as hot as today’s industrial kilns, nor did they have the ability to grind dry-hydrate as finely as we can today. These two factors resulted in a discernibly different kind of lime, one of the key ingredients in both mortar and cement. It also meant that the local cements had something like one-fifth of the compressive strength of today’s cement. Given this, it is no surprise that the old walls of many of these buildings crumbled, and that the repairs introduced newer building materials, bricks and mortar, into older sections of stone walls.

Builders know that when it comes to repairs of such buildings, that the mortar should be weaker than the brick or stone which they surround. Since the old lime mortars breathed, they behaved like a gasket, responding to fluctuations of temperature and humidity. The older style of hand-made bricks are softer than factory-made bricks, and often crack when there is not enough give in the mortar. I am told that by looking carefully at how a building has crumbled, one can learn a lot about when it was either built or repaired. 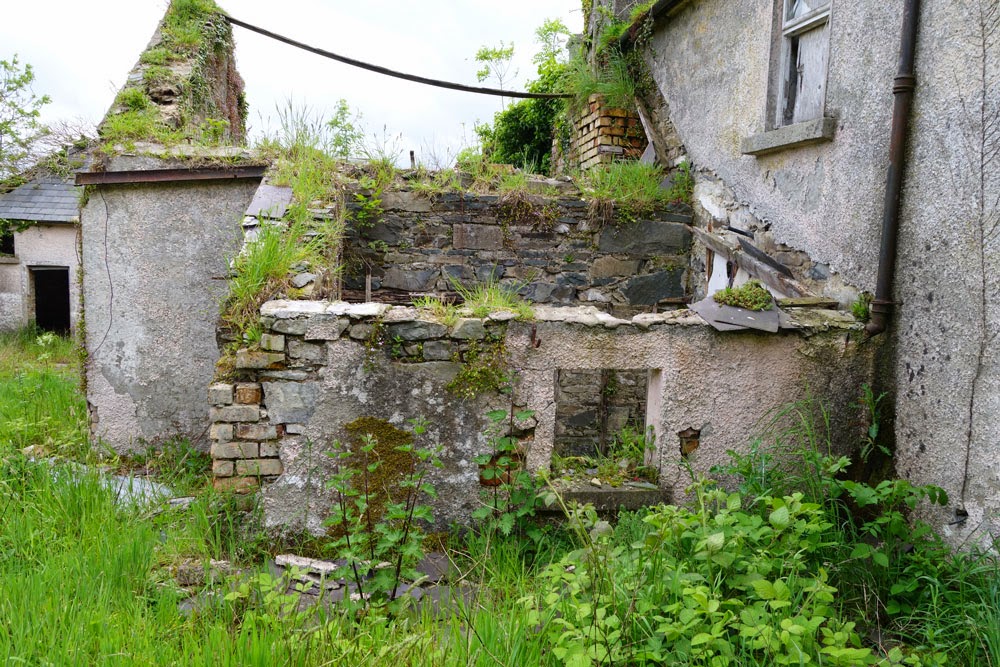 Since mortar is an important clue for dating the repairs and additions to centuries-old buildings such as Urker Lodge, it is also important to know that there were shortages in decent cement in South Armagh during WWII. For a while, it was strictly rationed. The use of lime-mortar crept back in at that time, and continued to be used for some time thereafter. For this reason, some repairs can be misleading, looking as if they had been done much earlier.

In the 1970s, there were significant renovations of Urker Lodge, with new dormers added and old buildings re-purposed. Not long after this work was completed, the economic challenges and political unrest of the region resulted in the buildings being abandoned, and then not repaired. There was no point in keeping it up, and the state of the buildings have long passed the point of no return.

Still, there is a small upside when it comes to dating the buildings that surround the yard. The stucco facing has fallen off in patches, and has opened up a view of the older structures beneath. As I study the old bones of these ruins, it is as if these stones and timbers could talk. Not that what they have to say is always totally clear to me. I am continuing to learn how to listen.

I plan to revisit Crossmaglen next spring, and hope to learn more by matching archival photos, old surveys, descriptions in leases, and contemporary pictures of the ruins. I also hope to have more time to listen to those people who have lived their entire lives in the region. They know so much more than I do. Until then, the best that I can do is to share some pictures and links.

Other resources:
Bricks: A Guide to the Repair of Historic Brickwork
Masonry Walls in Ireland
Previous related posts on this blog site:
The Tale of a Townland.
Urker Lodge.
More photos of Urker Lodge.
Website materials at The Silver Bowl:
Jackson leases at Urker and Liscalgot.
1692 Thomas Ball Dividend.
Photos of Urker Lodge.

Posted by SharonOddieBrown at 10:03 AM