Madeline Eglantine Jackson was born about 1816, so even though I don’t have her death date, she will have long been dead and buried . Still, she lives on in her portrait at Cabra Castle. I met her when she was keeping her eye on the till at the front entrance of what is now a hotel.

Cabra Castle has been splendidly restored and is now a prime example of how to repurpose one of Ireland’s many Stately Homes. Now that it has been turned into a four star hotel, it is surprisingly affordable. It has that kind of luxury that can only be achieved when the words Stately and Home snug up against each other.

There is something about the Irish country sense of scale that is of the human-kind. It is not the cold glitz of so many high-end places inspired by the kinds of designers who have snorted enough cocaine that edge is all that makes sense to them. Here, there are chairs which have been arranged in such a manner that you really do want to engage. Tables with fine linens seem to have been set not to flaunt wealth, but rather to say: this is what style looks like when comfort is foremost. 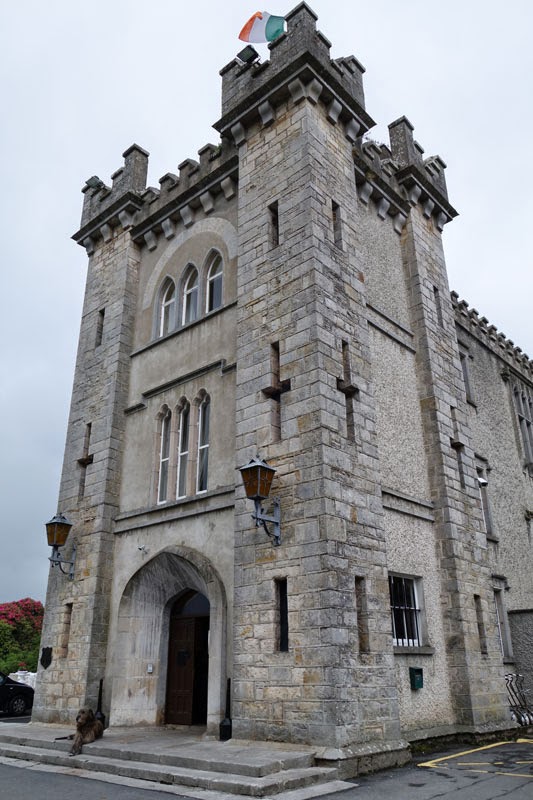 I have yet to stay there – we merely stopped in, which one can do. The Castle is open to the public a certain number of hours every day. Oscar, the Irish wolfhound who rests on the front steps, in all his glory, barely looks up. When we were there, with the intention of seeing Madeline, dozens of people were arriving with clothes on hangers, readying to celebrate a wedding. I felt as if I were an extra in a movie. We poked about a bit, and then left them to their festivities.

For those who can get a bit wonkish about family trees, here is where Madeleine Eglantine JACKSON fits in.First of all, she is not one my Jacksons, but even so her family from Co. Mayo does share something of a similar back story. Like my lot, her family were merchants, ship owners, mayors and sheriffs, in their case from Kent and Devonshire.

Like many of my Jacksons, who seem to be linked to the Jacksons of Coleraine, these Jacksons knew well how to diversify in business, pick the winning side in politics, and to play the role of big frog in a little pond.

The first of this lot to settle in Ireland was Francis Jackson (abt 1630-1678) who was a Captain of Dragoons in Cromwell’s army. As a reward for his services, he ended up with a considerable spread in Co. Mayo, and built a large fortified house at Enniscoe, on the banks of Lough Conn.

Six generations later, Madeleine Eglantine Jackson was born and with her marriage to Rev. Mervin Pratt (1807-1890) – a painting of him is displayed at Cabra as well, the link of the Jacksons to Cabra Castle was forged :