Years ago, when out walking late at night, I came upon a twenty dollar bill on the road. I picked it up, and immediately saw by lamplight that it wasn’t real. It was a half-completed counterfeit bill with only one side printed. So, I had a story, but no real money. Sometimes, I think of that experience when I read on the Internet that all the Jacksons of Co. Kildare are related to the Jacksons of ....

Unlike the one-sided twenty dollar bill, it isn’t that these stories are counterfeit nor that they are necessarily untrue. It is just that they have as much currency as that bill did. There is never any source material to back the claim. I recently saw a version of this when Googling something else:

GUIDE TO IRISH QUAKER RECORDS 1654 – 1860 COIMISIUN ... www.irishmanuscripts.ie/digital/guidetquakerrecords/files/.../search.x...
The Jackson family of Kildare were related to most of the big Quaker families. ...... Armagh ; at Lisna- garvey or Lisburn ; at Belturbet in Co. Cavan ; at Grange ...
I have not included this as a hyperlink because it won't take you where you think it should, not that it is an evil virus or anything like that. Please get in touch with me if you know what it was supposed to link to. I am beyond curious.

Even so, I do suspect it is true that The Jackson family of Kildare were related to most of the big Quaker families. ...... but the path to proving it continues to be elusive.My most recent focus is to document the Jacksons of Co. Cavan. This is because of a sentence written by the daughter of Sir Thomas JACKSON (1841-1915) in the early 1900s:

My Father came of an English family, one of whom went to Ireland as an officer in the Army in Queen Elizabeth's reign- was given a grant of land in County Cavan.

Queen Elizabeth I died in 1603. I mention this as someone who failed history in High School. Belatedly, I have learned that dates matter. They really matter.

From here, my quest gets more arcane. This failed history student has had to do penance and learn hundreds of dates, as well as hundreds of names of townlands and landlords. What makes it worse is that the records of so many of these townland names are like that childhood whispering game - the one where one person whispers a word in the ear of the person to her left, for example the word: breakfast. The next person whispers it to the person on her left, and so on until it comes back to first person who started it. By the time it has gotten back to her, the word has become: beetle.

With townland, parish, and barony names, the vowels change most often, and the rest depends in part on local accents or a legal clerk who can’t spell. At least, that is my theory. It is also how I go about making sense of the following.

In the early 1600s, according to the report done by Sir Nicholas Pynnar in 1618, Sir George Mainwaring from Shropshire, England was granted 2,000 acres in The Precinct of Loghtee, allotted to English Undertakers. Loghtee is now known as Upper Loughtee and Lower Loughtee.  The boundaries of this barony were not quite the same as today, but even so, it is an important land unit to bear in mind. It helps to avoid the error of choosing the wrong townland. There is often more than one townland sharing the same name within a given County.

In this Precinct aka Barony, Mainwaring erected a brick house, a stone bawn, and a village of 7 houses. This represented a significant investment. Permanence was clearly the plan. Three freeholders and 21 lessees lived there, including Thomas Jackson and Bartholemew Jackson. On August 20, 1616, Sir Mainwaring demised to Thomas Jackson the poll of Agharaugh, and two acres of Gortnecoshe, with a messuage for a term of 41 years. He also leased to Bartholomew Jackson and his assigns the pole called Pollybrally for 41 years. NOTE: pole and poll are spelled as they were in the original document – one footnote, two versions. A poll or pole – no matter how you spell it - refers to a townland.

This is where the Circle Game comes into play again. Agharaugh is clearly Agharahan and Gortnecoshe is now the townland of Gortnekesh. Both townlands are in the parish of Annagelliff,  in the Barony of Upper Loughtee. They are also within a short walking distance of each other. As for Pollybrally? My best guess is that if Thomas and Bartholomew Jackson were related – and they probably were - it is most likely that they lived in nearby townlands. This leads me to consider the possibility of Pollamore Near and Pollamore Far. 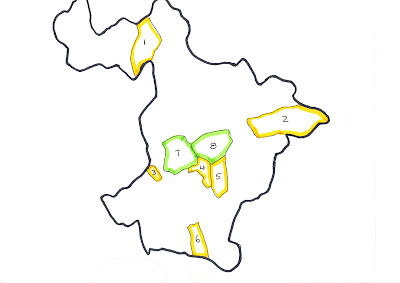 From here, it is like throwing a stone in the water and then following the pattern of the ripples. These are the kinds of questions I often ask myself:

It may turn out that it is no coincidence that Richard Jackson, the buttonmaker who lost his crops, animals and household goods during the Rebellion of 1641, lived in Ffarnham aka Farnham, Urney, very close to where the Jacksons first leased land in 1616. (SEE: the 1642 depositions)

The next wave of Jacksons, in the 1650s, were the Quakers who settled at Belturbet, Co. Cavan. Belturbet is north of the parish of Annagelliff with the parish of Castleterra in between them. It would be an easy walking distance from where the first Jacksons settled. A hundred years later, Jacksons were still living there, and continue to do so into the 21st Century.

Half a century after these Quakers arrived in Co. Cavan, a will of Samuel Jackson dated 1705 mentions his lands in Co. Cavan in the townland of Drumgola, Urney. Samuel was a wealthy merchant, living in Dublin, with extended family in Kirby Lonsdale, Westmorland, Coleraine, Londonderry, and Tatham, Yorkshire. He also owned forfeited lands in the townland of Lisnagroat, which – once again playing the Circle Game – I suspect is Lismagratty, Parish of Castleterra, Barony of Upper Loughtee. Lismagratty and Drumgola are in different parishes, but they are on the borders of these parishes, and butt up against each other. Cows probably grazed in both fields with no clue as to the difference.

Samuel Jackson also held land in the townlands of Bratley, Co. Carlow, but a townland of that name no longer exists in Cavan. One farfetched guess is that it could be the townland of Pollybrally. This is because it borders the lands granted to Jacksons in 1616. Obviously, I need to defer to townland experts on this one. Perhaps someone can set me straight here.

Finally, one last bit about Samuel Jackson and his 1705 will. The Rev. Robert Jackson of Tatham, Lancashire whose uncles are mentioned in his will, is likely the same Rev. Robert Jackson mentioned in a 1729 transfer of 50 acres in Reask, Parish Annagelliff (or else he is his son). Reask is a townland that is cheek by jowl with the townlands granted to Jacksons in 1616.

By now we have a veritable posse of smoking guns. The clusters of land holdings that were held over time by various Jacksons, many with the same names, are quite striking. More work is needed. I have prepared a number of documents to help others follow this in more detail, and will leave it at that for now. Whew! 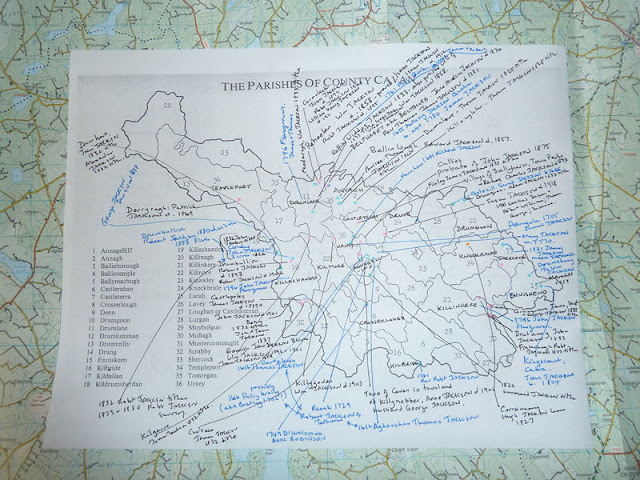 Probates of Jacksons who died in Co. Cavan.
Jacksons of Cavan – my 3rd version. This includes more research data including copious paragraphs of me thinking out loud.
Table of dates and land holdings of Jacksons in Cavan
Posted by SharonOddieBrown at 11:16 AM