Ho Tung was one of Sir Thomas Jackson’s cherished friends. After TJ’s death, he continued to stay in touch with Thomas’ eldest son, Sir Thomas Dare Jackson. There is more than one photo of Ho Tung in the various archives in the homes of my extended family in Ireland and England. Also, in the HSBC archives in London, there is a handwritten timeline of TJ’s life (the first Sir Thomas) that Ho Tung compiled to assist various researchers in writing the history of HSBC.

Not surprisingly, it was Ho Tung who presented an address to Thomas Jackson on behalf of the Chinese Community, when TJ was leaving Hong Kong, thanking him for ... fostering the good works of all classes of charitable and religious institutions in Hong Kong, and without discrimination, your private munificence ...” He also mentioned the very cordial relations that ever existed between yourself and the Chinese merchants and traders of Hong Kong.

The early life of Ho Tung was not so uncommon in the early days of Hong Kong.  His father was a merchant, Charles Henry Maurice Bosman, of Dutch and Jewish ancestry. His mother (surname Sze and given name probably Tai) had been sold by her family. She arrived in Hong Kong in 1855 and became Bosman’s long-term mistress, bearing him several children.

A couple of decades younger than Thomas Jackson, but doing business with him on a regular basis, Ho Tung had started out as a comprador brokering deals on behalf of merchants and bankers such as John Bell-Irving of Jardines, and Paul Chater of Chater & Mody – both of whom served on the board of HSBC when Jackson was the manager. By the time Ho Tung retired in 1900 as Jardine’s chief comprador, he was worth more than $2,000,000 in cash alone.

He was also active in public life. In 1895, he spoke out against legislation that discriminated against non-Europeans. In 1898 he chaired the Tung Wah Hospital board. In 1915, as part of his philanthropic activities, he made a substantial donation to the University of Hong Kong He also donated $50,000 to buy airplanes and ambulances to assist the British cause in WWI, and as a result of such actions, he received his first knighthood.

On the political front, he tried to bridge divides and hosted meetings with numerous Chinese political reformers at Idlewood, one of his several Hong Kong houses. In 1922, he brought rival Chinese war lords together in Hong Kong in an attempt to broker peace, not that he succeeded. As a result of actions such as this, and much more, he was awarded a 2nd knighthood in 1955.

His first wife was Margaret Mak, daughter of Hector MacLean’s mistress (Maclean was a Jardine’s agent). Clara Ching-yung, his second but ‘equal’ wife, was a cousin of his 1st wife.  Together, he and Clara had three sons and seven daughters. He also had a daughter with his concubine, Chau Yee-man. It would be surprising if these concurrent relationships didn’t result in at least some domestic complications.  In 1906, after successfully gaining an exemption from the Peak Reservation Ordinance which reserved The Peak for Europeans, he bought three houses on The Peak to accommodate his ever-expanding and complex family,

In preparation for my upcoming trip to Hong Kong, I revisited much of this history and was finally able to put two and two together. For some time, I had been perplexed by a photo that included an elderly man conversing with Ho Tung. The other man had looked familiar, but I couldn’t place him. It turned out that he was none other than George Bernard Shaw. Not only that, but Shaw – who was a distant cousin of Governor Lugard’s wife Dame Flora Louise Shaw - had previously visited Ho Tung at his home in Hong Kong in 1933. SEE: Financial Times article.

Here is the letter that Ho Tung sent to TJ’s son, Sir Thomas Dare Jackson, with the photos. It was this that made me realize who the two men were. The reference to Ayot, St Lawrence refers to the place where Shaw lived from 1906 until his death in November 1950 . Shaw died 8 months after the photo was taken. 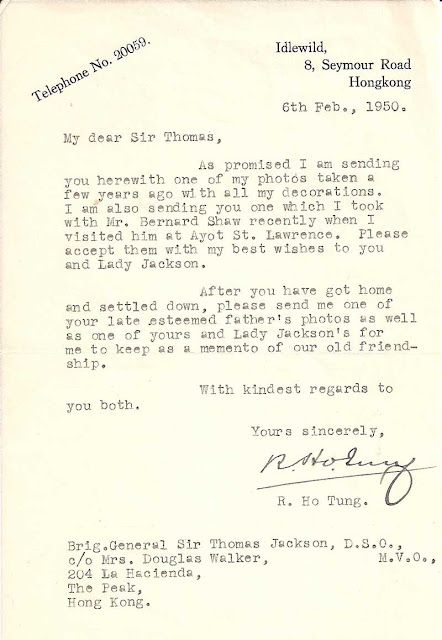 SOURCES: There is a splendid biography of Ho Tung, which includes much more than what I have mentioned here, in the Dictionary of Hong Kong Biography. There are also a number of interesting references in Hong Kong in Chinese History: Community and Social Unrest in the British Colony, 1842-1913. The quotes from the Chinese Address to Thomas Jackson come from Frank H. H. King, The Hongkong Bank in Late Imperial China 1864-1902. p. 567
GRATITUDE: The Bowman-Vaughan family often deserves special mention for their generosity in assisting me with my research, but particularly so in this case. Annabel shared these photos as well as the letter with me, and her sister Venetia photographed them much better than I could have. Their brother Tommy hosts me whenever I visit London – and years ago even went to the trouble to set up a guest suite for me. Their sister Juliet has also hosted me when I have been in the western part of Ireland. Great-grandchildren of Sir Thomas Jackson, they have all inherited his generosity of spirit and are all significant contributors to this story.

Posted by SharonOddieBrown at 1:39 PM