You can blame my great-great-grandmother Eliza Jackson (1827-1903) for why I suspect that Handsome James JACKSON of Drogheda might provide a clue when it comes to nailing down bits of the ancestral story of Sir Thomas Jackson (1841-1915) of HSBC fame. After all, she was the one who said that our Jackson ancestors were all clever, tall, good-looking people with beautiful hands. She also claimed: We have often been called mad, but never stupid.

Her son, Sir Thomas Jackson, went one step further on this topic, at least according to his daughter, Amy. Apparently, his 2nd great-grandfather and my g-g-g-great-grandfather, old George Jackson (1718-1782), was not only known for his wonderful skin, but also his extra-marital fondness for women. Whenever any girl living within a stone’s throw of Creggan Parish had a particularly good complexion, the neighbours would comment, Ah. She must be one of George Jackson's.

The legacy of these stories made me sit up and pay attention when I stumbled upon a description of John Jackson, son of Alderman Jackson of Drogheda in The Dublin Scuffle. It was printed in 1699, and written by John Dunton, an eccentric bookseller and even more eccentric writer. 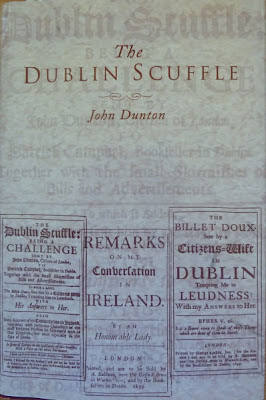 The Dublin Scuffleis a self-published gem. Dunton’s delight in describing himself and his adventures knows no bounds. It is a self aggrandizing polemic with no apologies for excess. It also offers up hundreds of vignettes of the times that make for compelling reading. The title page itself comes across like a verbal jazz riff, while the jumble of typefaces makes it looks as if the compositor had been reduced to scooping up and using whatever bits of type were near at hand. 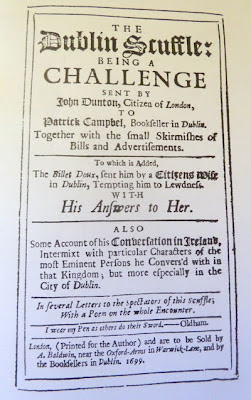 There are hundreds of snappy and brief portraits in this book, James Jackson, being merely one of them. Before I share Dunton’s description in this blog piece, let me back up a bit. In any detective work, it helps to line up the known facts before plunging on.

This James, who was described so memorably by Dunton, was a son of Alderman Richard Jackson, and also a grandson of an earlier Richard Jackson who also served the Corporation of Drogheda. In fact, to keep us on our toes, it seems as if the elected service of his father and grandfather may have overlapped. The first Richard was mentioned in the Council Book of the Corporation of Drogheda in 1657. He most likely settled there on the heels of the Cromwellian victory in 1649 having gained title to some lands as an “adventurer” rather than a soldier. “Adventurers” were men who had fronted loans to the English Parliament to fund the war. They were then repaid in land that had been seized from the residents and previous owners.
Where James’ grandfather came from, goodness knows, but he was first described as a carpenter. This does not mean that he himself went around with hammer and nails at the ready. In all likelihood, he employed carpenters. My reason for supposing this is that by 1658, he is described both as a sheriff and a mason and is no longer referred to as “Mr.” but as: “Esq.”. He was doing well enough to have a home with seven hearths in The Garr Warde. To give some sense of where he stood in the economic pecking order of the day, only five people in Drogheda had more hearths than he did – and they only had one or two more. I suspect his house was on Lawrence Street.
So, back to Dunton’s description of his grandson, James:

Mr. Wilde told me what a courteous person Mr. Jackson was; and when I came to his father's house, he received me in such an obliging manner, that his favors did transcend report, as much as they exceeded my dessert. Mdm., this gentleman resolves to live a bachelor, which I could not but wonder at; for doubtless Nature meant him a conqueror over all hearts, when she gave him such sense, and such beauty (for he's a very handsome man). His wit sparkles as well as eyes; and his discourse charms as well as his beauty; and I found by a little talking with him, that his mind is none of those narrow ones, who know one thing, and are ignorant of a thousand; but on the contrary, it is so very large, that although it cannot be said Jackson knew everything equally well, it is most certain, he can give an excellent account of all things; but though his soul is enriched with every virtue, yet I thought the most remarkable thing in him was his great humility and readiness to serve a stranger (for I might pass as such, never having seen him, but a minute or two in London). p218

Dunton could almost be suspected of having a crush on James, or at very least some ulterior motive best served by flattery.  If all I had to go on was my great-great grandmother’s description of previous generations of Jackson men, I would read Dunton’s description and think no more about it - but there is one more thing which does suggest a link between our Jacksons of south Armagh to those Jacksons of Drogheda:

I have been told that the Corporation of Drogheda placed the Jackson coat of arms over the town hall, in gratitude for the munificent gift old George gave them (I wish he had been sleeping when he did it) but I never had time when passing through, to see if it was the one. A letter from Eliza Jackson to her son Thomas in 1874.

Was George Jackson ((1718-1782) the donor of the crest or was it his lawyer son George, born mid-1700s and died after 1820, or was it another unknown to me George?
Why was the money donated?
What did the crest look like?

Was handsome James Jackson related to George of Urker, near Crossmaglen in Co. Armagh?
Did he ever marry? If so, are there any known descendants?

In the post that follows this, I will assemble some of my research bits and links to more research that may further this line of enquiry. They will be guaranteed to be boring to the casual readers of my blog, but absolutely riveting to those who enjoy this kind of search.

Posted by SharonOddieBrown at 3:32 PM