Cavananore, a townland of some 219 acres in Co. Louth, was occupied at least as early as the late 1600s by a Presbyterian family named Coulter. They were supposedly awarded the land for their valour at the Battle of the Boyne on the side of King William. The land stayed in my family thanks to the will of an Andrew Coulter of Cavananore who died in 1775. His sister, Barbara Coulter (1721-1795), married John Bradford (1705-1789) and their twin sons were executors of Andrew’s will. This is the easy part to follow.

The complicated parts came after Andrew’s death when the initial seeds of a multi-generational family feud were sown. It seems to have started with a land division between John & Barbara’s twin sons: Thomas Bradford (1739-1790) & Samuel Bradford (1739-1818). In the generations that succeeded them, the feud between the two branches of the family became almost biblical.

An early complication was the untimely death of Thomas Bradford in 1790. He mucked things up, as my ancestors often did, by dying before he got his affairs in order. In his case,  he died intestate, five days before Christmas. His only son and youngest child, Andrew Coulter Bradford, was just 2 years old., and Andrew’s older sister, Elizabeth - my g-g-g grandmother, would have been about 4 or 5 years old. Elizabeth, their mother, was 32 years old when she was widowed, and had five young children clinging to her skirts. The eldest child was only 8 years old.

Nine years after the death of Thomas Bradford, an agreement defined what portion was due to his widow; how much to the widow of Thomas’ brother-in-law, John Coulter (d. 1774); and also how much of the land and rents were to go to Thomas’ surviving twin, Samuel. In this agreement, rents were to be divvied up when they became due in November, as was the custom. Robert Dickie & John Bailie, a couple of neighbours who were probably also trustees , were to oversee the distribution. However, in such legal matters, the devil is often in the details.

Even though it would be way more fun to let my imagination run riot over all this, I should be careful not to overstate the consequences. At least no one was killed in this dispute, at least as far as I know. For example, it wasn’t as bad as the feuds between the daughters of King Lear, a play about land division and lousy governance if there ever was one. What it did share with the plot of King Lear was the entanglement of countless plots, subplots and counter-plots.

I suspect that envy first divided the two branches of the family when the relative values of the lands on either side of the dividing line became uneven, probably as a result of the hard work and skills of Andrew Coulter Bradford (1788-1847).  Andrew was the only son of Thomas, and therefore had inherited the land on the easterly side of the boundary after the death of his father in 1790.

A couple of decades later, in 1809, the main residence on Andrew’s side of the townland was the style of house common to farmers in the area, and was probably the one he was born in. It was a thatched single story bungalow. We know this because he signed an agreement, presumably because he had just turned 21, to take care of his mother and the unmarried sisters who lived with them. This included the helpful description of their home: The House to be Thatched, Tuff coated and white washed and kept as to its outside wants & repair by him.

An 1827 letter from Capt. Eliezer Birch Gilmore (1762-1834) to his half sister, Elizabeth Bradford (1758-1844) the widow of Thomas alludes to the discord that had already deepened in the following couple of decades:

On the other side [of this letter] you have a copy of Andy’s agreement . As I have a great deal of conversation with him on family matters he can give you every information on that subject. So soon as I get matters settled respecting this place I will then be able to determine on our further settlement, at present we are quite undetermined. That gives me real pleasure to learn that Tom McCullagh has at last settled all matters with his Brother in an amicable manner.

A decade after this, in 1837, the Field Book surveys and valuations reveal that the differences between the two halves of the estate had become considerable.
Already by this time, Andrew’s valuation is close to four times the value of the houses on his cousin’s side of the divide.

When Andrew died in 1847, never having married, one portion of his estate went to his niece Eliza Jackson, the mother of Sir Thomas Jackson. The land was favourably described in the lawyer’s notes of January 16, 1850:

Cavanore & Anahavackey contain jointly about 100 acres & was considered quite a model farm so admirably had it been managed by Mr. Bradford & it was provided with a very fine residence & every article of the best & most improved description necessary for its management.

It is hard to say with absolute certainty, at least based on records found so far, when the current Cavananore House was actually completed. It was at very least occupied before 1847. A inventory done in 1850 as part of the probate of Andrew Coulter Bradford’s will describes the contents of a breakfast parlour, dining room, a drawing room, hallway, 4 bedrooms, a kitchen & pantry. The 22 stair rods indicate a second story. It would have been considered a substantial house for that time and place. Most other houses, even those of reasonably prosperous farmers, were still single story with thatched roofs.

What was it like to be living there at this time? Unsettled, at best. According to the 1841 census there were 13 houses and 63 people residing in Cavananore, but in the decade that followed the population dropped by more than 50%. The 1847 famine came between the two census dates. Not only were lives and livelihoods lost during the famine, but rents dropped in the aftermath, and many previously productive farmers could not hold on to their title. With respect to Cavananore, it was clear there was no longer enough rental income to pay out the bequests of Andrew Coulter Bradford’s will, at least not in the way that they had been stipulated and then interpreted by his trustees.

The front part of the original house remains high on a hill with a commanding view of the countryside. At some point, at least by 1854, it was an L-shaped structure with five windows on one side, and 6 windows on the other.

This is where it gets fun to compare contemporary pictures with old maps. Here is a sketch I did of the outline of the house and outbuildings as compiled from a range of estate maps from the time of Griffiths Valuation in 1854. The house is in red, the enclosed garden in light green, farm buildings in yellow.  The portion that I have coloured in brown was where I suspect that the original thatched bungalow stood: 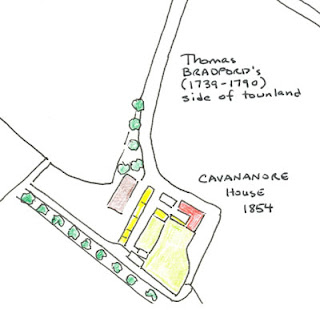 Here is a sketch where I try to imagine the shape of the house, based on merging the look of the contemporary photo of the house with the mid-1850s maps, coupled with information in the 1901 census (as you can see, my artistic talents did not progress past elementary school): 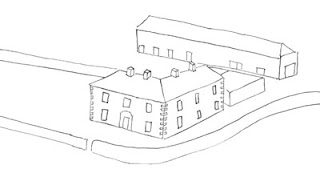 Two events, one of destruction and one of construction, explain why the 1854 map shows the house to be L-shaped while the 1985 picture (at the top of this page) shows a T-shaped house. The destructive event was an extensive fire started by the IRA which destroyed the back section on the right hand side. They set the fire because there was a rumour that the Black and Tans, their arch foes, were about to set up camp there, and they sought to pre-empt this. According to some accounts, the Black and Tans had no such plan. For now, I cannot verify either account. Later, what remained of the house did end up being a place used by the  IRA, another one of those twists of fate particular to this region.

The addition that looks like a stub of the T at the back of the house in the 1985 photograph was added in the early 1950s when amenities such as running water, electricity and indoor toilets were added. Before then, Annie Lynch, the widow who lived there with her four boys, had to go to the village for batteries to run the radio. Everything else was run by people power. Her son has told me that the water was pumped, and the lavatory was outside the house in a stone walled structure known as The Sugar House. Clearly the connotation is different than what it would be in Canada where a sugar shack is where maple sugar is made.

If we could time travel back a 150 years or so, we would see Andrew Coulter Bradford’s widowed mother and maiden sisters and nieces living out their natural days. We would see the frequent visitors from Urker and Liscalgot and Shortstone and other nearby townlands who stayed overnight. We would also see the grief in 1874 of Thomas Jackson, the yet-to-be-knighted HSBC banker based in Hong Kong, when his infant daughter died unexpectedly. She died when he and his young wife were enjoying their first visit to Ireland since he had left more than a decade earlier. They were proud to be showing off their young family to their various relations. Baby Edith Bradford Jackson was only four months old when she died. Her memorial in the family grave site at Creggan Church is the only Jackson family memorial that is still legible.

Understanding all of these family dynamics and experiences goes some distance to explaining why Sir Thomas Jackson retained such a keen interest in Cavananore well into the 20th Century. It was one of the many properties in the area adding up to more than 800 acres that he purchased in his later life and held until his death in 1915. He never returned to live in Ireland, dying at his desk on Lombard Street in London, but a significant part of his heart remained with this land and these people - his people. This was clear right up to the time of his very last posted letter.

SOURCES: There are dozens of sources that buttress the facts in this story. Rather than listing them all, here is a link to a page on my website that I will keep updating: Cavananore
Posted by SharonOddieBrown at 3:00 PM