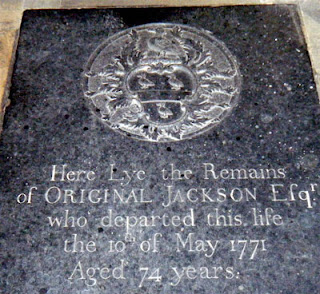 The story of Original Jackson may turn out to have absolutely nothing to do with the Jacksons I am researching, still, I decided to figure out more about who he was for three reasons:
My first solid piece of information on Original Jackson came last August when Les Swinburne sent me photos from St. Mary’s and St. Regius Church. With his permission, I posted them on my website.  The ones from St. Mary’s were a slam dunk fit with the Jacksons of Duddington. Since St. Regius and St. Mary’s are quite close - about 6 miles apart – the first one in the town of Duddington, the second in Water Newton, I started to wonder about a connection between these various Jacksons. My curiosity about this increased when I noted that a later generation of one of the Duddington Jacksons – Charles William Jackson (1797-1819) – married a Rachel Bromhead who came from Connington,  near Godmanchester. Who knows? There may be a connection.
Last week, the current owner of Island Hall, Christopher Vane Percy, sent me six pages of new-to-me material. It included stabs at a couple of Jackson family trees as well as notes from a genealogist he had once employed to learn more about the Jackson connection to both Island Hall and the diarist Samuel Pepys. (The Pepys part, I will address in a future post.) Christopher’s interest in Jacksons is because the historic Georgian House he lives in – now called Island Hall - was built by Original Jackson in celebration of his son’s 21st birthday. The question that Christopher was pursuing was: Who was this Original Jackson?
The name is rare, but not unique. Notes and Queries suggests that the name Original was a derivation of Reginald. If you say both names quickly with a regional accent, it is easy to believe that this is possible. But maybe not. Some suggest that the name Original was mostly used by Pilgrims. The author of Curiositiesof Puritan Nomenclature  disagrees with this. He claims that the name was a way of tagging the first born, the original heir. Another respondent in the same set of queries claims that Original Jackson, Original Upsall, and Original Marshall were all of Rampton, Nottinghamshire, and that in the same rough time frame there were also men named: Original Bellamy, Original Lowis, Original Babington as well as an Original Hall mentioned in Subsidy Roll, Notts; and an Original Pearl of Lincoln. Since Rampton, Nottinghamshire is also where an Alexander JACKSON was the assistant churchwarden in 1596, clearly, it would be worth learning more about this line of Jacksons.
The Puritan connection to Original Jackson may not be farfetched. Many of the early Puritans were from families of literate yeoman farmers. They were successful financially, but were irked at the state control over religion. Many of them were educated at Corpus Christi College, Cambridge. The Archbishop there was more set on persecuting Roman Catholics, and pretty much let the Puritans be.
The genealogist who did a wonderful bit of spade work for Christopher wondered it there might be two Original Jackson’s: one at Water Newton and one at Godmanchester. I can see why he (or she) thought that, but am pretty certain that they are one and the same:
It seems reasonable that in 1678, three years before his death, that Original Jackson might be living with his daughter.  He would have been sixty-eight years old. In terms of possible connections between the Duddington and Godmanchester Jacksons, I also note that several of the Duddington Jacksons owned land at Castor. This is less than two miles from Water Newton.
From here, I want to share a little thinking out loud. There is a third tantalizing bit that begs to be understood:
Notes and Queries, March 21, 1885: St. Nicholas's Church, Whitehaven: April 9, 1787, Isabella Jackson, wife of Original Jackson, buried.
The Original JACKSON (1697-1771) of Godmanchester was married and had children, but his wife was Sarah Dowsing, not Isabel. Also, St. Nicholas' Church is in Cumbria, nowhere near either Godmanchester or Water Newton.
So who was this other Original Jackson? In the 1700s, Whitehaven was a large port - second only to London. Interestingly, just down the coast is the town of St. Bees, another place that was thick with JACKSONs in the early 1600s. Of particular interest to me is Rev. Richard Jackson (1650-1738) who was schoolmaster at St. Bees for 52 years. SOURCE: The Ejected of Cumberland.
This Richard Jackson lived not too far distant from the Rev. Richard Jackson (1602-1680) of Kirby Lonsdale, the earliest known ancestor of the Jacksons of Coleraine – the ones who had a shoveller in their crest. As I said earlier: birds of a feather.
Other resources:
Posted by SharonOddieBrown at 12:38 PM