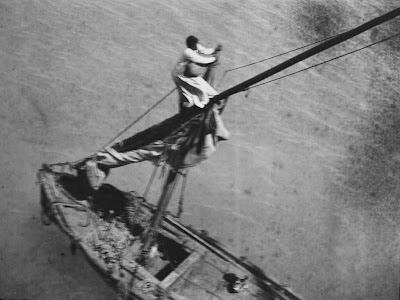 It cheers me no end to see one of our female ancestors, skirts billowing in the wind,  perched at the nether reaches of the mizzenmast. [NOTE: Since I posted this, a few emails have suggested to me that she was probably on the main mast, possibly on a Chinese junk. In another email, My retired Coast Guard Commander husband says it probably is a junk and the mast is a main mast lanteen sail which means it could be swung fore or aft like a modern day jib. He estimated she is up about 25 feet and possibly to unfurl the sail. 2nd NOTE: Apparently a link beneath was broken. It now works.]
Reading between the lines in various letters and reports, we do have the impression that our Armagh-Hong Kong Jacksons and their cousins were a wild and crazy lot, but these impressions rarely came fleshed out with descriptions or evidence as clear as this. After all, this is not the kind of event that gets mentioned in letters home to dear old Mum, or that ever shows up with any clarity in the dusty staff evaluations in the archives of HSBC.
Before I saw this photo, the closest I had come to seeing this kind of daring from the women in our family had been in the letters of my great-great grandmother, when she was expressing her fury over her daughter Mary’s affair with a peacock of a man, a man who would later become Mary’s second husband.
My own personal claim to utterly, reckless idiocy – which I can now share with you since my parents are now long dead - was when I was about the same age of this young woman. Not that my kind of risk-taking required any physical prowess. That was never my forte. No, in my case I knocked back a substantial amount of vodka, climbed on the back of Kent Steele’s motorcycle, and after he popped the clutch, the two of us screamed eastwards down King Edward in Vancouver, at speeds that exceeded 100 mph, right through the four way stop at McDonald. Even at the time when we were doing this, I knew that it was way beyond stupid, but I have to say, it was exhilarating.
On the other hand, shinnying up the mast of a ship in full Victorian attire strikes me as a much more laudable expression of daring and exhilaration. This irrepressible zest for life was shared by many of the Irish in Hong Kong in the late 1800s. It probably took something of this kind of risk-taking personality to be able to leave Ireland behind for the unknowns of a life in Hong Kong at that time.
I have always liked the image of wing-walking, that World War I craze, where people stepped out onto the wing of a bi-plane in flight, and walked out to the furthest possible reach of the wing. In order to grasp the overhead strut for the next step, it was always necessary to let go of the hand furthest back. It was also important to have secured solid footing. It is precisely that kind of alternate letting go, and then reaching out and holding tight, that every immigrant has to be prepared to do.
As a complement to what can be learned from archival letters about the spirit of the times, I have posted two groups of pictures of family members in Hong Kong in the late 1890s. The first, is a collection of Outings I know of little that better illustrates how both business and personal connections overlapped in the small Hong Kong-European community at that time.
The second collection of photos are of a Chess Tournament which was organized in order to raise funds for the Union Church. Two of the children of Thomas Jackson were included as players. The game was held on the grounds of Hon. J.J. Keswick, one of the Keswick family who made their fortune with Jardines and the opium trade. J.J. was also on the board of HSBC, hence his connection with Thomas Jackson – like so many -  was a mix of the social, professional, and philanthropic.
.
Posted by SharonOddieBrown at 4:16 PM